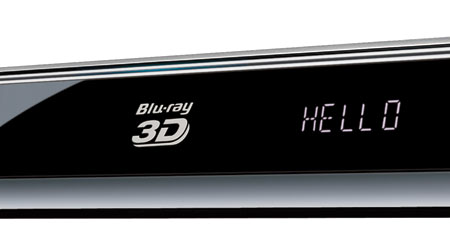 Model numbers can sometimes be confusing, and LG’s HR559D doesn’t help. It essentially replaces the LG HR599D. One subtle digit of difference. But the effective practical difference is that the new model adds support for Blu-ray 3D.

The other practical difference is price. This unit has seen the benefit of recently plummeting prices for consumer electronics equipment, selling for $799, or some $580 less than the previous non-3D model.

It is one useful device but we have to be careful in describing what it does, and what it doesn’t do. It is a personal video recorder for free-to-air digital TV. It is a Blu-ray 3D (and DVD and CD) player. It is also somewhat of a media player, supporting still photos, video and music from a range of sources (USB, home network, and its own hard disk drive).

But, note, it is not Blu-ray or DVD recorder. The optical drive is for playback only.

For watching TV and recording, it has only one high definition tuner, rather than the more common two. There is a 500GB hard disk drive for recording, and also for holding additional media.

The unit has a HDMI output and composite and component video outputs. One slight peculiarity is the unit’s lack of an optical digital audio output (although it does have coaxial to use at a pinch). This is probably unimportant for most users who will draw their audio from the HDMI connection, but if you are still using an old pre-HDMI home theatre receiver (with digital audio supported by optical or coaxial connections – sometimes both) its absence might be enough to compell you to overlook the HR559D.

In terms of basic stuff, this player delivers the goods. It is reasonably fast in operation and it output the proper Blu-ray 3D image whenever required. Both with Blu-ray 3D and regular Blu-ray, the picture quality was simply excellent. If you are so inclined you can tweak video output settings, but normally we’d suggest that you just leave this on the standard settings.

In one respect the multi-function nature of this device impedes Blu-ray enjoyment: if the disc is already in place when the unit is switched on, then starting up the disc will require hitting the ‘Home’ key and working through a couple of steps to start playback.

One cool playback feature: while watching a movie you can bring up information about it from the Gracenotes database. Great if you can’t quite remember who that actor is. It works on both DVD and Blu-ray.

Since this unit has a Blu-ray player built in, it necessarily offers full 1080p output, and it allows this for TV display as well. Its internal video processing did a fine job here, performing progressive scan conversion and scaling with much higher quality than is the norm for PVRs. Even SDTV generally had a smooth watchable result on the large projection screen.

And of course you can record. This was limited to just one station at a time. Indeed, you can’t watch a different station while one is recording, which is a severe limitation on usability, given that there are many twin tuner PVRs for several hundred fewer dollars.

When setting up recordings, you will also need to explicitly set an early start and a late finish – there is no automatic ‘padding’ – to ensure that you don’t miss part of the program.

The media support was generally very good. Neither Windows Media Audio Lossless nor uncompressed WAV music were supported, but regular WMA and MP3 were. Likewise, PNG and JPG graphics and MPEG2, DIVX and AVI video was all supported. You can access these through your network or from USB. And for more convenient repeat access you can copy them to the unit’s hard disk drive.

If you want a Blu-ray 3D player and are just the occasional recorder of free-to-air TV, then the LG HR559D will probably suit you well. Hard-core TV recorders would do better to buy a separate Blu-ray player and a dedicated PVR.