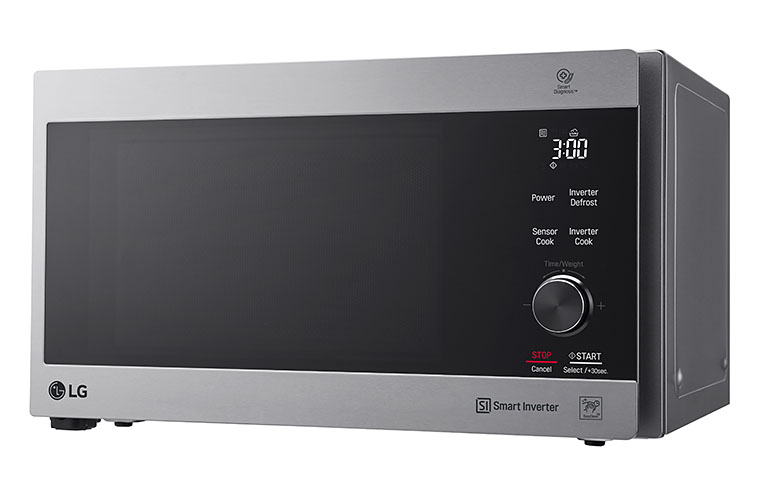 When I set my microwave to cook at anything other than High, it starts cooking at High. That’s because it attempts of achieve a simulacrum of, say, Medium, by running full blast for half the time, and running not at all for the other half.

In other words, whatever is inside is overcooking for half the time, resting for other half. Of course, the switching on and off is at regular intervals, but even so the cooking process is a zig-zag in power level over time.

LG’s new NewChef range of microwave ovens uses Smart Inverter Technology. That just means that when you’re cooking at Medium, instead of cycling between on and off, the oven runs at a consistent medium strength. That gives a steady, ongoing increase in temperature to whatever you’re cooking. LG says that it also allows more precise temperatures and more even heating, cooking and defrosting throughout the food.

But, as they say in the best advertisements, that’s not all. These microwave ovens feature “Anti-Bacterial EasyClean”, an internal surface coating that eliminates 99.99 per cent of “harmful bacteria”. LG has switched over to LEDs for the internal lighting, increasing brightness by three times and using less power than in other LG microwave ovens.

The rotating turntable has also been improved in stability, thanks to six support points, while some models offer up to 1200 watts of power.

A number of models also feature convection oven functionality, and these include “Healthy Fry”, an air fry method that reduces the amount of fat by up to 72% in potato wedges, compared with deep frying.

Brad Reed, Home Appliance Marketing Manager at LG Australia says that there are “more than 10 models in total across the portfolio of both inverter microwave and Convection/Infrared microwave ovens” in the new range. He adds, “The new NeoChef range represents a step change in the LG microwave oven portfolio and refreshes our offering with the aim of significantly improving our share of this cooking appliance segment. We hope that it will change how consumers see and use their microwaves, providing a variety of cooking options. Families are on-the-go more than ever and the LG NeoChef products can help consumers prepare food in a simple, fast and efficient way.”

The LG NeoChef microwave ovens come in three sizes: 25 litres, 39 litres and 42 litres, and prices vary according to model, fittings (convection or no), size and finish. They are available in white, black and stainless steel finishes. The top two non-convection models – both with 1200 watts of microwave power, are the 42 litre MS4266OSS with stainless steel finish (see picture at top), available for $399, and the MS4266OBS with a black finish, for $349.

The convection models are in the 39 litre size and will be available in early November. The top of the line stainless steel MJ3966ASS convection model will retail for $829.