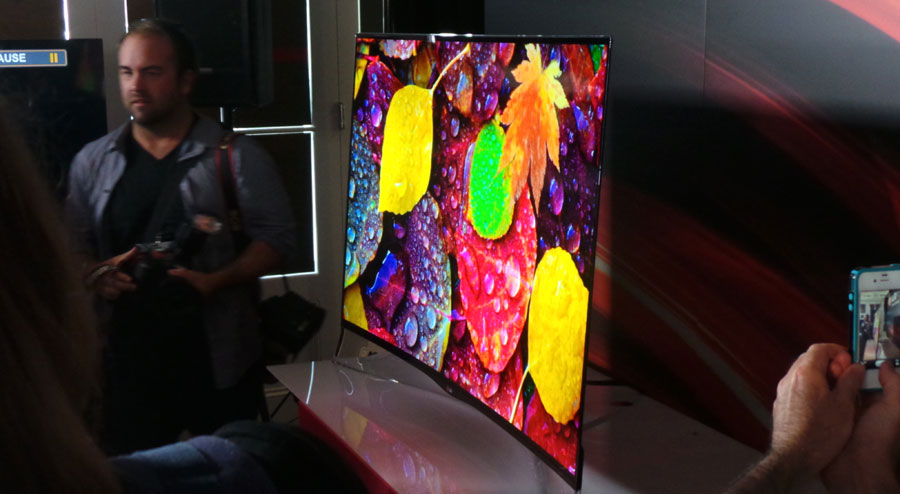 We’re pretty sure we speak for all TV fanatics out there, but finally – freakin’ finally – OLED is becoming a reality, with LG announcing that it will be bringing that mystical technology to Australia, and a few more 4K TVs, too.

Two types of technology are going to lead the TVs of the future if LG is to be believed, as the company gets ready to make the humble idiot box evolve, with a combination of a Smart TV experience, style and design, and the choice of either Organic Light Emitting Diodes or a 4K panel.

The latter of these was officially launched in Australia in December last year, with the first 4K TV hitting the few stores it was advertised in for $15999.

Almost six months later, the story is that LG’s 84 inch Ultra High Definition TV is just as impressive as it was when it was launched, but now it’s selling in over 100 locations across the country, and it will have two more models accompanying it later in the year.

“With the innovative display technology and content for premium viewing experiences, combined with cutting-edge designs and the latest in Ultra High Definition and Smart TV technology, LG will continue to transform the home theatre experience and its place in the family home,” said Lambro Skropidis, Marketing General Manager for LG Australia.

The three models of Ultra High Definition TV will all feature the massive 4K picture quality, stuffing roughly eight megapixels into the screen, with sizes of either 84, 65, and 55 inches diagonally.

Official pricing hasn’t yet been announced, though LG did say that indicative prices are currently around $8999 for the 65 inch model and $6999 for the 55 inch UHD TV, a rough trade-up of $2900 for the comparable Full HD TVs on the market.

All LG Smart TVs will also include access to over 500 apps, and with games being worked on from Disney, EA, and Activision, chances are that you’ll be using your TV for more than just watching movies and shows. Adding to that fact, LG will be rolling out a cloud service in May for use with Android phones that will allow owners of LG TVs to upload photos for easy sharing with their products, providing 5GB storage.

We’re also curious what other services LG will be announcing later on, with one slide showing off what looked like an Adobe Premiere logo, and making us wonder if there will be some future collaboration.

While the new 4K TVs are obviously a big announcement, there was also a 4.3mm thin OLED TV to impress us.

“Our Curved OLED TV is not only proof of LG’s role as a pioneer in next- generation displays but also a testament to LG’s commitment to bringing to market the most exciting TV technology available today,” said Havis Kwon, President and CEO of LG’s Home Entertainment company.

Announced earlier this week by LG’s Korean offices, the curved OLED isn’t just the first curved OLED to be announced with a sale price, but is also the first OLED TV by LG to be talked about with an Australian release date.

First seen at the Consumer Electronics Show in Las Vegas at the beginning of the year, LG’s curved OLED TV boasts more than just an insanely thin depth, with brighter and more dynamic colours than what an LED or LCD TV can offer, a response times over 100 times faster, and a backing material made of carbon fibre which is lighter than aluminium.

What’s more, the curve of the OLED TV sits at 15 degrees on each side and creates what LG says is a more immersive experience closer to what you get at the cinema.

From our point of view, the colour and clarity was just so spot on. Images looks astonishing from the side, and from our brief standpoint of the front, even better.

LG wasn’t only introducing two TVs, though: it also has announced a partnership with Ewan McGregor, working with the celebrated actor to help promote the line-up of products from LG this year.

“Ewan McGregor is widely considered to be one of the world’s most engaging actors so we are both proud and thrilled to announce our partnership with him and delighted that he will be promoting the new LG Home Entertainment range in Australia and New Zealand,” said Lambro Skropidis, Marketing General Manager for LG Australia.

McGregor will appear in TV commercials, while his likeness will be used in a collection of marketing materials that will appear in stores and publications.

Speaking about the TVs this week, the actor said that “the colours in that one are phenomenal,” looking at the curved OLED TV.

“I worried about being able to describe the picture without swearing,” said McGregor. “It’s so f*cking unbelievable.”

Of the Ultra High Definition TV, the actor said that “I suppose that’s like a cinema experience at home when you’re not at a cinema.

“With big TVs, usually the picture’s not very good,” said McGregor. “Crap is the technical word, and that’s [the LG TV] is amazing. It looks like you’re falling into it.”

LG’s range of TVs will go beyond the OLED and 4K varieties, with several Full HD models coming out between the 22 and 60 inch sizes for LED and LCDs, while plasma TVs will arrive in 50 and 60 inch models.