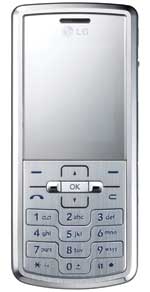 Thus far, music hasn’t exactly been a priority on LG phones. Sure, a number of models support it, but mostly as an afterthought, a way to use the processing power built into the phone. Unfortunately, so it still is with the KE770: it plays music, and is probably the closest thing LG has to a music phone (at least until the LG Secret KF750 becomes available in Australia), but it’s not going to replace your iPod.

What the sleek KE770 does have going for it is a cool that’s second to none. It makes even the Sony Walkman phones look ugly in comparison. The screen, when switched off, is actually a mirror surface that comes to life when the phone is activated. While the screen is kind of small, and its ability to pick up fingerprints is likely to induce the occasional psychotic episode owners, there are few phones that can match the Shine for sexiness.

As a music player, the Shine certainly has some things to recommend it. The audio quality is outstanding, even from the phone’s speaker, and it doesn’t get any worse at high volumes; there’s a cool visualisation that displays when you’re playing music; the interface is very simple and very easy to get a grip on. But it’s not on par with a dedicated MP3 player, mostly because it lacks the sorting options that a dedicated player offers. You can’t sort songs by artist, or genre or anything else. You can shuffle, or repeat and that’s about it. There are also no dedicated play controls anywhere on the phone.

If you don’t mind something that’s functionally the equivalent of the iPod Shuffle, then KE770 should be enough for you. If you like having the capacity to sort music and set up playlists, then a more music-focused phone is probably the go.

With it’s excellent audio quality and responsive keypad and controls (notable in such a small phone), the LG Shine is one of the most pleasant-to-use phones we’ve encountered. Its reception was a little iffy on occasion during our tests, but this GSM phone should suit the city-dweller perfectly.

The two megapixel camera lags behind some of the competition when it comes to resolution, but we found it otherwise takes excellent pictures, especially in situations (like poor lighting) that tends to challenge other cameras.

While the KE770 Shine gets top marks for cool, we can’t really recommend it as a music player. It’s well behind the times on that measure, and it also lacks 3G capabilities (for 3G, look to the KU970 model), but it is very reasonably priced, and a handy way to get a music-capable phone without having to blow the year’s electronics budget in one hit.