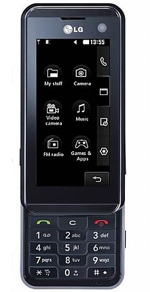 For a relative new comer to the high-value mobile game, LG has made an impressive start. The device maker has thrown itself headlong into the desirable market of touchscreen mobiles before most competitors got their act together. And this latest phone follows the touchscreen trend (or frenzy), but also holds onto the humble keypad – and for good measure throws in a BlackBerry-esque click wheel to boot. LG’s move to put three inputs in one device is a competitive risk. The perfect combination of favoured input devices, or the worst of all three worlds?

Touchscreen mobiles have established themselves as the consumer favourite since the Apple iPhone debuted. And since this model is LG’s latest of several attempts at touch screens, you’d hope they’d learnt from past mistakes. Sadly, this device is a step backwards. The touch response is awful to use, ‘flick’ scrolling through menus is near impossible, and you’ll find yourself tapping icons with increasing force to finally bring about the desired effect.

Then there’s the click wheel on the device’s side. Older model BlackBerry users will know it – rotate to conveniently scroll up and down through menu lists. But like the touchscreen the wheel is poorly integrated into menus, giving sluggish scrolling leaving you wishing for your old directional pad.

And the third input method, the keypad, works just fine. But three inputs? What was LG thinking? A user will have to constantly move from keypad to screen to wheel and back again for even the most simple tasks! Responses to all inputs are just slow enough to prove annoying. It makes everyday use of the device a chore – LG would be wise to abandon the mismatched triple-play and move on. Quickly.

But the phone does come with some handy features. Decent MP3 player works well with as microSD card loaded with tunes. The 3MP camera takes shots of good quality, and throws in a simple video recorder too. Then there’s all the standards – a web browser, Google apps like maps and mail, FM radio, voice recorder, calendar etc. A shortcut menu on the home screen is a good idea, but would have been more handy if the touchscreen wasn’t such a dog.

Have a look at competing devices in this price range. A $699 RRP puts it in a similar league to the 3G iPhone, as well as other LG mobiles which much better capabilities. Nokia and Sony Ericsson devices of similar price come with an equal swag of features (except the touchscreen). For a fashionable device, the price can be expected – but it is not as good as others in its fraternity.

LG has brazenly marketed itself as a heavyweight in fashion phones and high-end devices, and this shiny go-getter does appeal to the eye. It looks, and behaves, similarly to earlier entrants like the LG Prada and excellent LG Viewty. But this latest shot at the high-end misses the mark. It’s simply hard to use. And no matter how beautiful it looks, the fashion phoners will hate moving from keypad to touchscreen to scroll wheel and back.