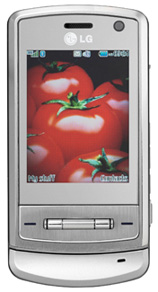 LG, like most other phone manufacturers, seems to be on an eternal and elusive quest for the killer gimmick. The gimmick that sets this mobile phone apart from all the other mobile phone gimmicks. With the LG Shine, more prosaically known as the KU970, they’ve come up with a pretty good one. When switched off, the LCD screen has mirror-like reflectivity – in fact, until you turn the phone on, the front looks and functions like a mirror. Then you switch it on and – like magic – the mirror becomes a very bright, very clear 240 by 320 pixel LCD screen. It’s guaranteed to make your friends say “wow, cool!” at least once.

When the novelty of that has worn off, you’ve still got a very good 3G phone on your hands. It supports HSDPA (that’s high-speed 3G data), does web browsing and email, has contacts and calendar applications, can download Java games and music from online services, has an outstanding 2 megapixel still/video camera (with a flash) and does all the things you’d expect a top-of-the-line 3G phone to do. It’s tri-band GSM capable, supports Bluetooth headsets for listening to music and making calls, can act as a ‘mass’ storage device for PC files (kind of like a thumb drive) and can also operate as a 3G modem for PCs connected to it via the supplied USB cable.

The Shine is a slide phone with a lot going for it. It’s solidly built, looks funky – although the mirror surface does have an maddening tendency to pick up fingerprints – and the buttons are, for the most part, highly accessible. The only problem we had with the controls was the central thumb wheel used for scrolling through options on the screen. It’s so small that it’s hard to control at times, and wasn’t great for scrolling through large playlists, for example. Not that large music playlists are really possible on the shine.

As a portable music player, the LG Shine promises a lot, but fails to deliver in some key areas. Its number one failure is the lack of memory on the Australian version. It comes with 512MB of internal memory – enough for about 100 songs – but there’s no way to expand that. There’s no flash memory card slots, so 512MB is all you’re ever gonna have.

It comes with wireless Bluetooth headphones, or you can listen to music using the internal speaker. The playback controls are fairly minimal – you can shuffle and repeat, but you can?t dynamically organize music by artist or album, for example. In short, it’s not a touch on a dedicated MP3 player when it comes to music organisation.

There are some good points, however. With the exception of Ogg Vorbis, it supports any type of music file you’d care to name, and it will also play MP4 and WMV video. It plays MP3 music back with depth and quality and it’s very easy to move files to and from the phone using the supplied USB cable. When set in Mass Storage mode, you can just drag files to and from the LG with Windows Explorer.

The phone also supports speakerphone and can act as a voice recorder. It performed well at both tasks when we tested it.

With a mirror LCD, the LG Shine has a unique style that will appeal to many a fashion conscious phone buyer. It’s also a great phone, with tons of features, excellent internet and personal information capabilities and all the latest messaging technologies. As a portable music player it’s flawed, however, with very limited memory capacity and weak music organisation.