LG launches 4K Ultra HD OLED in Australia, one of only ten countries 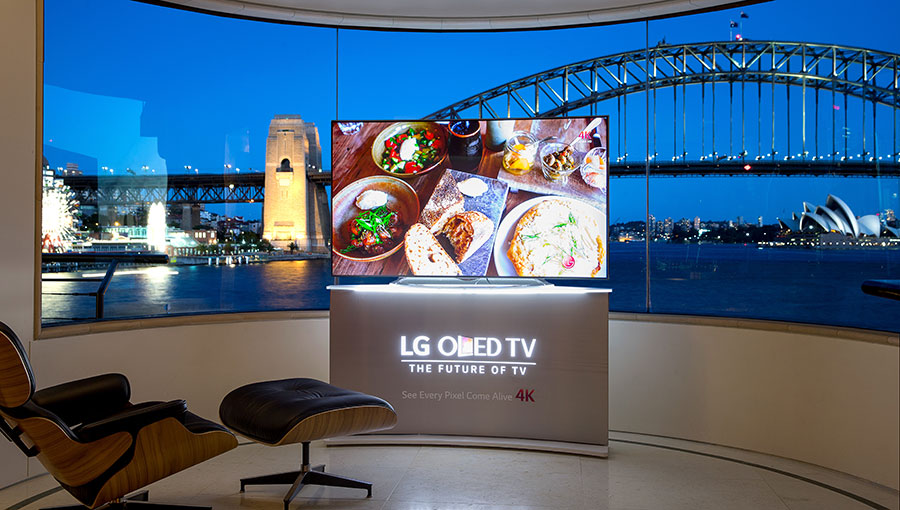 As far as picture quality goes, there’s very little that competes with the organic light emitting diode. It’s not cheap, but this organic display component provides some of the strongest colours you’re likely to find on any TV, and now, you can find in a 4K TV.

If you have a fair amount of money and are looking for the ultimate in TVs, it appears your time is at hand, as LG unleashes a Ultra High Definition OLED TV in Australia, one of only ten places in the world to receive the new televisions, which take advantage of the organic LED panels and match it with Ultra High Definition technology, showing a resolution of 3840×2160 on a self-lit display.

Two of these TVs will be released locally, providing the technology in both a 65 and 77 inch form, with support for 3D provided and four pairs of glasses included, while the TV side of things will be able to pick up on Hybrid Broadcast (Hbb) transmissions through a twin tuner.

Smarts are also here, with webOS running the show, found in LG’s TVs from earlier in the year and utilised on these models too, providing access to the web and media around your home using the TV and its Magic (motion-sensitive) Remote.

A total of four HDMI ports can be found on this model, with two USB 2.0 ports and one USB 3.0 port, too, as well as component, wired Ethernet and WiFi, ideal for those smart homes we all have these days.

There’s also just under 4GB of internal memory (3.9GB, which is a pretty specific number), an 8 megapixel camera for video conferencing, and a different audio system for each model TV, with 40 watts of power for the 65 inch telly, and 70 watts for the 77 inch model.

“This is the breakthrough TV we’ve been waiting for,” said LG’s Grant Vandenberg. “Consumers are ready for this technology, the question is which companies are ready to provide this technology? Make no mistake, OLED is not a phase; OLED is the future of TVs.”

LG’s General Manager in Australia, Lambro Skropidis, added that “4K Ultra HD has been an amazing development, but we are seeing something far more special here.

“By combining 4K Ultra HD with OLED, LG really is offering some of the most advanced TV technology in the world to Australian audiences,” he said. “We are confident that the sheer visual experience it offers will become the new benchmark for TV buffs, sports fans and movie-lovers alike.”

Of course, the biggest issue any 4K TV will have — OLED or otherwise — is a lack of content, and that’s still the same issue here on LG’s curved Ultra HD OLED TVs.

With no official 4K-ready optical format — we hear a Blu-ray UHD format is coming next year — and no high-speed broadband fast enough in Australia to make use of 4K digital deliveries.

That said, the TVs do include digital upscaling using a specialty engine, which together with the infinite contrast levels and motion clarity should make Full HD content shine on the screen.

“If you ask me about 4K Ultra HD TV, I’ll tell you it is amazing,” said Skropidis.

“But combined with OLED, I’ll tell you it’s a game-changer. OLED really is the future of television and home entertainment… and the future is here, right now.”

Pricing for the new OLED tellies doesn’t come cheap, though the technology is basically sitting at a similar price point to last year’s Full HD OLED TVs, which have dropped in price dramatically.

And as for last year’s model, that takes a price dive as well, with the 55 inch Full HD OLED TV being replaced with a slightly different model sporting a less plasticky stand, and with webOS loaded for its smart TV interface and hybrid-broadcast setup to work on the system.

Like the 4K OLED, the colours will be rich, the contrast infinite, and the panel made with organic LEDs, but unlike the 4K model, the picture is in Full HD only, running 1920×1080.

“Not only is the price-point lower than a year ago, making it more affordable, I can tell you that LG’s OLED TVs have picture quality and design benefits that simply elevate the home entertainment experience to whole new levels.”