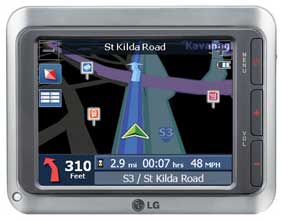 LG’s LN800 asks for a premium price for a GPS-only unit, but only just backs that up in a features sense. The light sensor is a neat touch for working out when to drop into night mode, and we do like the automatically sensing standby power option, but in almost every other aspect of its operation, we found the LN800 sorely lacking.

Despite using the same core components – most notably the SiRFStar III GPS chipset – as every other major GPS player in the market today, the LN800 was noticeably sluggish and erratic when it came to acquiring a GPS lock on our test vehicle. Perhaps if we were driving through an earthquake, bouncing around the road, we might have been accurately represented on the LN800’s display – but suffice to say, we weren’t.

That same feeling of lethargy hit us whenever we had to use the LN800’s menu structures, which are slow and don’t allow you to filter Australian results by state – although you can do either a city/street or street/city search, which is a nice touch. Likewise, if we veered off the proscribed path, the LN800 took longer than we’d like to come up with an alternative path. Like many GPS units, we found the unit trying to send us through more than a few prohibited turns; it uses the same Sensis map data as the majority, and had largely the same errors we’d seen before.

The light sensor on the LN800 is a nice touch; it automatically adjusts the display colour scheme if it works out it’s getting dark to a high-contrast blue scheme. It’s worth noting that you can trip this going under large bridges or into carparks.

The much-vaunted text-to-speech capability should work well – the basic phrases and the way it tells you to navigate are sound – but sadly, the actual sounds themselves aren’t. We’ve heard better speech samples coming out of an Apple II, circa 1983 – and that’s just for basic words such as “left” or “right”, or the LN800’s own unique interpretation of a roundabout, which is, for the record, “traffic circle”.

Give it some Australian street names, and you’ll spend half the time chortling at its appalling mispronunciations, and the other half scratching your head trying to work out which street it actually meant. Given that it tended to run slowly and erratically, we quickly gave up on the LN800’s speech capabilities, which are only available if you’re using the supposedly US English voice anyway.

The LN800 sells itself as an easy-to-use GPS system, thanks in large part to its simple design and spoken word capabilities. The reality is rather more drab; it’s a slow and not entirely reliable GPS system with woeful spoken word instructions that doesn’t live up to its asking price in the competitive GPS space.