LG MWC 2019: A dual screen with a difference 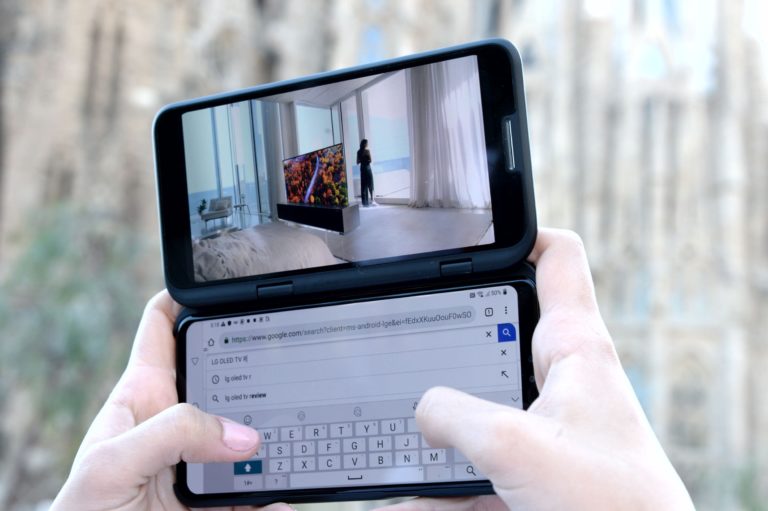 LG makes great smartphones. The LG MWC 2019 announcements were safe rather than ground breaking – but the idea of an optional second screen is novel.

As a single screen device, it has

While others pursue one-piece foldables, LG has smartly adopted an optional hinge design – not unlike a 360° hinge laptop. It has allowed it to do two different things.

First, make the main phone 8.3mm thin and 183g. Second, the design allows for larger 5G antenna and a larger battery as well as a larger vapour chamber thermal solution for the Qualcomm 855 powerhouse SoC inside.

LG has confirmed it will be coming to Australia via Telstra soon!

We are often confused between the G and V series – the latter is supposed to be the flagship, but sometimes the former is a better performer.

The G8 ThinQ has

We often forget that few have a grand or so to spend on a smartphone.

LG has the new Q and K series for mass and value markets. We won’t go into all the specifications here and we are not sure if these models will come to Australia.

The Q60, K50 and K40 all feature AI functions typically found in flagship smartphones. AI CAM magically recognises objects it sees and recommends the ideal shooting mode for the best results. And a dedicated Google Assistant button gives users immediate access to the most widely-used virtual assistant on smartphones today.

In addition to its impressive 13MP front camera, the Q60 has three rear cameras: 16MP with Phase Detection Auto Focus (PDAF), 5MP with Super Wide Angle and a 2MP shooter with Depth Sensor that captures a sharp image of the subject while leaving the background blurred. With four unique lenses, Q60 owners can take perfect shots.

While Samsung and Huawei suck all of the smartphone oxygen out of the air at MWC, don’t overlook LG for quality, reliable smartphones.

This year LG has played it safe with 5G in the V40 and an optional screen – it may just pay dividends while the disruptive 5G market sorts itself out. And LG triple rear cameras are a delight to use making the best of wide-angle photography.

And its Q and K series are good honest phones at reasonable prices.