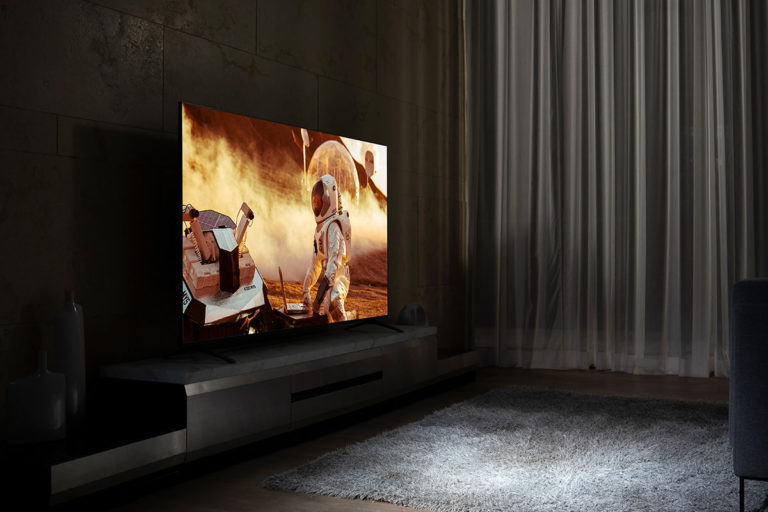 Un-friggin’-believable. That’s how I sum up in one word the LG Nano99 Series 75-inch 8K TV. I can’t proclaim it the best TV on the market. I haven’t checked them all. But any competition is going to have to work very hard to beat this TV.

LG essentially has three types of TV on offer. Its regular run-of-the-mill models may be full HD or 4K. Its premium LCD TVs are the NanoCell models, of which this is the absolute top of the range. And, of course, it has OLED above all that (see what we think of LG OLED TVs here). You can buy an 8K OLED from LG. But the entry level 77-inch model will set you back nearly $36,000.

For a big 8K picture, the LG Nano99 series is far more affordable. We’re sure you could easily get it for less than ten grand. There’s also a 65-inch model for $3,000 less.

LG Nano Cell technology uses particles to absorb unwanted light wavelengths and enhance the purity of the red and green colors displayed on the screen. In addition, they create subtler, more accurate colors that stay true, even at wide viewing angles.

So that’s not quantum dot technology, although the end result is similar: getting the red and green colour elements more tightly grouped around the middle of their respective wavelengths makes it easier to produce an accurate colour mix.

I’m used to a 65-inch TV so the 75-inch model was huge. As we’ll see, the 8K resolution solved any problems I may have had from sitting too close. It has a narrow bezel that almost disappears by comparison with the size of the screen. The panel is around 50mm thick – none of that sheet-of-glass effect that OLED gives you. The legs are widely spaced. My TV bench is 1.5 metres. The TV fitted with around one centimetre of clearance on either side of its legs.

In addition to the four HDMI ports (see below), the TV has USB sockets – you can plug a hard disk into one to record and time-shift broadcast TV – an optical digital audio output, Ethernet and dual-band Wi-Fi. I think the Ethernet connection is 100Mbps-rated, not gigabit. I tried streaming a 100Mbps video through it and the TV almost managed to play it uninterrupted. It just caught briefly to re-buffer around every five to twenty seconds.

We’re unlikely to ever see an 8K format of the silver disc we’ve been used to these past few decades. It took long enough for UltraHD discs to appear. Nobody is going to want to put in the investment required, since with streaming taking over there will be few returns on investment. However, if 8K sources do ever appear, this TV should support it. Says LG, the four “HDMI ports support HDCP 2.3, 60fps @ 4320p / 120fps @ 2160p”. 4320p is 8K. Note that UltraHD is supported at up to 120 frames per second. Good stuff for gamers, that.

But you can stream stuff. I searched on 8K in YouTube and found some very nice-looking travelogue stuff. Note, it turned out to be playing back at 720p by default. You have to enable 8K as the video is playing. When I did, the sharpness and detail was glorious. I also have some 8K test clips on my network server that I’ve managed to, um, borrow in recent years. Since they were shot specifically to demonstrate the clarity of 8K, they were presented stunningly. I could stand just a metre away from the TV and still enjoy the smooth detail of the video.

But still we are unlikely to have a ready stream of 8K stuff for general viewing any time soon. So …

What’s the point then of 8K?

Let’s say that you have a DVD. Its vertical resolution is 576 pixels. Try upscaling that to full HD TV’s 1080 pixels and you’ll see that the arithmetic means that some horizontal rows in the incoming signal will be fully contained in two rows of display pixels while others will require three rows. The results are poor. That’s why UltraHD TVs often look better with DVDs than Full HD TVs. An 8K TV allows even greater refinement. All processing creates artefacts to some extent. The more pixels, the smaller those artefacts tend to be, so they largely fade into being invisibly small on an 8K TV.

In fact, all content looked pretty good on this TV. Even DVDs and standard definition free to air TV looked surprisingly good, even if somewhat softened by the sheer size of the screen.

What I most enjoyed watching was UltraHD content. The colours on the Deadpool UHD popped. And even though I’m used to the speed of OLED, there was no apparent LCD smearing during fast-moving scenes. Even better than Deadpool was the delivery of the other-worldly colours from the UltraHD version of Dunkirk. It was stunning.

Even though the TV can’t quite compete with OLED for black levels, it did a creditable job on the opening rain-scene of It, again on UltraHD Blu-ray. This one’s encoded with Dolby Vision, so it’s as good as it gets.

Other material on the LG Nano99 Series 75-inch 8K TV

Standard Blu-ray? Simply excellent. It was difficult to believe, at times, that Blu-ray is hobbled by 8-bit colour and the commensurate limitations on the available shades of grey. Instead, even things like a dark jacket in a dark scene in the remastered Blu-ray release of The Fugitive is textured and layered. It was impressive stuff. Also impressive was the motion smoothing. The default setting almost entirely eliminated judder on my favourite test scene, without producing anything other than the very slightest hint of picture distortion.

I use full-black test patterns with a few single-pixel and four-pixel white dots to try to determine how the backlighting zones are arranged. Since there’s a fair bit of splash between zones, there’s still a degree of estimation involved. It seemed to me that the zones were a grid, eight zones high and eight to ten zones wide. That makes for between 64 and 80 zones. On the test pattern, that inevitably meant fairly large areas of the screen glowing somewhat through the blackness around the dots. With real world content that’s a relatively rare situation. Importantly, all the dots were visible, even the single-pixel ones. Some TVs won’t light a zone for single pixel, which can mean lost detail (such as stars in a space scene). However it was clear that a zone’s backlight was turned up to a higher level if there was a larger dot than was the case for single-pixel dots.

The LG Nano99 Series 75-inch 8K TV has speakers. Of course. The specifications tell me that they have sixty watts available to drive them and provide Dolby Atmos processing. And, yes, they worked. Which is all I’m going to say about them.

Look, a TV of this size and quality needs sound to match and you’re not going to get that out of any TV’s speakers. I largely used the TV with the company’s premium soundbar, reviewed here. But to truly match this TV, one really ought to get a real home theatre receiver and loudspeakers. The TV supports eARC – the extended Audio Return Channel – which can do things like feed Dolby Atmos from streaming Netflix shows to a connected audio device. It can also deliver sound via Bluetooth, so you can do private listening on your headphones.

One of the soundbars I used it with had a lip sync issue. No matter. There is a delay setting in the TV’s setup menu that quickly fixed that.

Smart stuff in the LG Nano99

As with the OLED we looked at a few months ago, this TV uses the latest WebOS 5.0 operating system. It comes with LG’s Magic Remote. This is far and away the best remote control on the market for a smart TV. You just point and click for most things. It also has a microphone. Press the button and you can use LG’s ThinQ smart assistant to answer your questions and control the TV. Or perhaps Google Assistant, which is also implemented. Generally the former is used for control and searching for content, while the latter is used for general enquiries, web searches and so on.

But the TV also has a built-in microphone and you can use ThinQ just by saying “Hi LG”. The voice that the TV uses when you’re employing ThinQ is very different to the mellifluous tones of Google’s voice. It sounds computer-synthesised … poorly. But it worked well enough for changing channels and inputs.

The TV supported most of the media I streamed to it from my network server, including the above-mentioned 8K stuff, along with UltraHD video encoded with Dolby Vision.

The TV supports most of the useful network interfaces. I was able to swiftly connect to it with an iPhone (AirPlay 2), a Windows computer and an Android phone ( both Miracast), as well as send video, photos and music from my server via DLNA using an app on my phone. The one thing not supported is Chromecast, so tough luck if you have a Google Pixel phone.

I created an 8K test pattern to test whether the TV actually did deliver the full 33 megapixels. And indeed it did. Each horizontal and vertical line was perfectly presented in its proper colour. Excellent stuff, that. But there was one wrinkle with photos: it maps them pixel for pixel and if there’s an option to scale them up to use the full screen, I couldn’t find it. Remember, the great majority of phones and cameras produce images rather smaller than 33MP. These will show with black bars around all sides. A 720-pixel wide image I have up on the screen is like a thumbnail image in a sea of black. (Low resolution videos do, of course, scale up.)

I tried out Netflix and Prime Video and both worked snappily and smoothly.