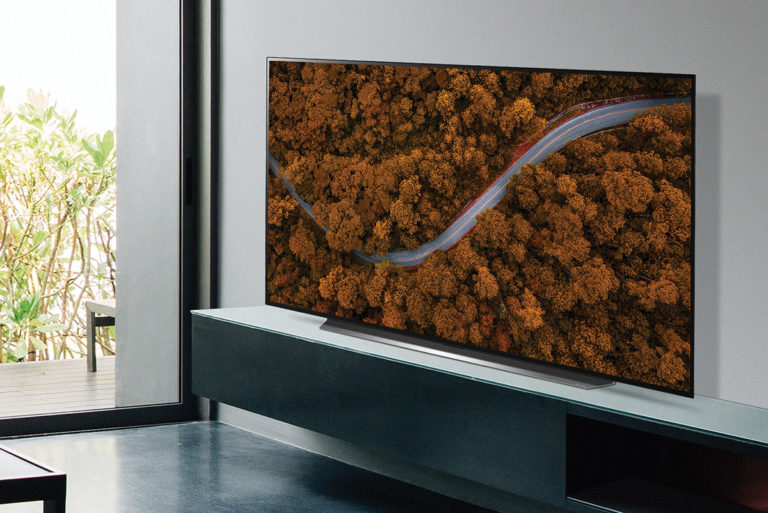 Want to watch a movie in May 2020? Well, forget about the cinema. How about a big TV for your home. And the best TV? OLED, without a doubt. The best OLED? Arguably it’s the newest “X” series of LG OLED TVs. Earlier today to men came and took away the LG OLED65CX smart TV, with which I’ve spent the last week. The X stands for 10. You may recall that last year we reviewed the LG OLED65C9 TV, the previous model.

Yes, as the model name suggests, this is a 65-inch model. (Actually, it’s very slightly smaller at 163.9cm.) There are also 55-inch and 77-inch models available. Being OLED, most of the panel is incredibly thin. According to my calipers, the top half is only 3.65mm thick. (I refuse to use that “3.65mm-thin” marketing-speak, but incredibly thin it is.) The bottom swells out to 47mm thick. You have to put the electronics and loudspeakers somewhere.

The TV doesn’t have a bezel as such, just a few extra millimetres of glass around the picture area. It comes with a stand – it has a slanted panel attached to the front to bounce the sound from the down-firing speakers out into the room. But you can leave the stand off and put it on a wall instead, using a standard VESA mount. It’s fitted out with all the usual connections. Importantly, all four HDMI inputs are rated to the HDMI 2.1 standard. That supports high frame rate video.

Yes, the TV will accept inputs at up to 120 frames per second. Furthermore, it supports the HGiG mode (HDR for gamers), Nvidia G-Sync, AMD FreeSync and Variable Refresh Rate. All these, along with the Auto Low Latency Mode, allow smooth, responsive game play. I’ll return later to one aspect of this I could measure.

The TV has USB, Ethernet and, of course, Wi-Fi. The latter is rated to 802.11ac standards. Even though LG has its own branded smart system – ThinQ – the company has clearly decided to make it work with everything. So, for example, you can voice control it with both Google Assistant and Amazon Alexa. And even with Apple HomeKit. You can send your media to it via DLNA or Miracast or Apple AirPlay.

The LG OLED65CX TV’s interface is WebOS 5.0. It comes with the point-and-click Magic Remote. This is RF-paired to the TV so you don’t even need line-of-sight. It remains the easiest and most efficient smart TV interface on the market. (Fun fact: WebOS was originally developed by Palm – of Palm Pilot fame – for its now defunct smart phones.) The interface was snappy and responsive.

There are plenty of apps available for WebOS. Pre-installed are apps for YouTube, Netflix, Disney+, Apple TV and ABC iView. The TV happily played all the Dolby Vision and HDR test videos I have on my network server. Plus music. It showed photos at full screen resolution, including full colour. Some TVs bottleneck photos down to 1080p somewhere along the line.

The TV has 40 watts of power for its speakers and, as far as TV speakers go, the sound was fine. But, really, a TV that can produce a picture as good as this one should be used with commensurately good sound system. I used the Audio Return Channel capability with a Denon AVR-X3500H home theatre receiver and several thousand dollars worth of speakers in a 5.1.2 setup.

Games play with the LG OLED65CX

LG in its release presentation – done remotely, of course, via Zoom, rather than the usual gathering in some venue in Sydney – made a thing about gaming performance. Have you ever played some kind of video game on your PS4 or Xbox or whatever, plugged into your TV, and found it very difficult to get good score? Perhaps it’s because of the lag, delay, latency, of the screen. TVs take time to process the incoming picture signal to present it on the screen. For example, if the TV is performing motion smoothing, it can display an incoming frame, but must then wait at least for the next incoming frame before it can calculate and display the intermediate frame that the TV generates to smooth the motion. If the video is running at 60fps, that’s at least 16.7 milliseconds. Working everything out takes time.

I’ve been measuring the delay in TV video for years. The slowest I’ve seen was more than 200ms – that’s one fifth of a second. Good luck trying to win the draw in a first person shooter game if the TV adds 200ms to your own 200-300ms reaction time! But that was worst case. In recent years, with the standard settings – including motion smoothing – the delay on a 4K TV has typically been a little over 100ms. But TV makers aren’t dumb. Ever wondered what the “Game” picture mode does? Basically, it switches all the picture processing off, apart from that subset required to make the picture actually appear. No motion smoothing. No noise reduction. Little to no other image “improvement”. That has typically reduced the lag to around 40ms. That’s a great improvement, but it’s still something like 20% of the natural human reaction time.

How fast can the LG OLED65CX be?

By way of comparison, I use a basic 32-inch Samsung LCD TV as a monitor for two of my computers. It is full HD in resolution, and has little in the way of picture processing. It’s very snappy indeed, with only a 30-millisecond lag.

Gamers are going to be very satisfied with this TV. Note, my gadget tests using a 1080i60 signal. If the game is running at a higher frame rate – up to 120fps is supported – then lag is likely to be even lower. LG says as little as 7ms.

Very few reviewers report on this stuff. I suspect it’s because very few reviewers understand it. But here’s the thing. Almost all TVs are designed in nations which use 60 hertz mains power. Here in Australia we use 50 hertz. What has that got to do with TVs? Well, back in the olden days, TV frame rates were locked to the mains frequency. That is, 60 hertz in the US, Japan, South Korea. That’s where most of our TVs come from. But Australian broadcast TV – as with Europe and India – is at 50 hertz.

More than that, it’s 50 hertz interlaced. That means that half the frame is sent, then one fiftieth of a second later the other half the frame is sent. How these two half-frames are re-assembled into a whole frame actually has a visible impact on picture quality. A significantly stronger one than many of the things with which reviewers primarily concern themselves.

The LG OLED65CX does, I think, at least as good a job as any of the hundreds of TVs I’ve previously reviewed, and indeed better than almost all of them. It was quick and accurate in analysing the incoming signal, and determining whether “video” or “film” style deinterlacing should be used. It briefly failed at the start of Chapter 10 of the Australian Blu-ray transfer of Miss Potter (which is present at 1080i50). But pretty much all systems fail at that point – it’s just as the camera pan down over Miss Potter’s new home comes to an end. There’s a wobble in the video, particularly evident around the window and door frame.

With 576i50 stuff – the mainstay of Australian DVD and SDTV – again the performance was somewhere between very good and excellent. There were a couple of moments in my torture-test clips which challenged the video interpreter within the LG OLED65CX TV. But they lasted not more than a second.

The motion smoothing was simply excellent. New to me, there’s now a default setting of “Natural”. This seems to work on a simple frame-doubling system. That is, it creates one additional output frame for each couplet of incoming frames (some systems produce even more). It was not the most extreme smoother of motion, but you will almost never notice any residual judder. Importantly, neither you will ever see any distortion surrounding foreground objects, nor any of the super-smooth “soap opera effect”.

This processing is presumably due to the latest Alpha9 generation 3 video processor. I have to say, LG seems to have taken a step up in picture quality. Not so much with UltraHD content. That remains brilliant, but it has been for some years on OLED. Dolby Vision, HDR and HLG is all supported. Blacks are simply perfect. Colour is pretty much perfect – rich and accurate. OLED rules.

But what has significantly improved is the look of regular Blu-ray discs and even standard definition TV and DVDs. The upscaling of low resolutions seems to have been achieved with remarkable sharpness, yet without the usual sharpening artefacts, making for a smooth, clean look. The mapping of 8-bit colour to the 10-bit display was natural and effective. It was often hard to tell any real difference between the UltraHD version of a move and the regular Blu-ray. LG has done a first class job.

So, really, whether it’s for watching find TV shows and movies, or for playing video games on a large screen, you’d be hard put to find any TV capable of outperforming the LG OLED65CX smart TV. Oh, and one last thing. Despite the abysmal value of the Australian dollar, the LG OLED65CX is debuting at $1,000 less than the debut price of last year’s LG OLED65C9.

LG’s website for this TV is here. You can see where to buy these excellent TVs here