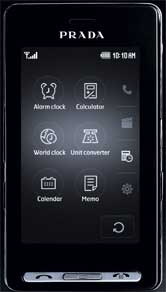 LG throws its hat into the ring in the high-end fashion label phone market, following the lead of Motorola’s Dolce & Gabbana effort, with the LG Prada touchscreen. No doubt its sleek design and touch-screen interface will appeal to both the fashionistas and the punters impatient for the Apple iPhone, but is the Prada model’s beauty more than just skin deep?

The Prada’s main selling point, besides the brand name coupled with a slick advertising campaign, is its touch screen. The inspiration clearly came from the yet-to-be-released iPhone, with its very similar design and touch interface. But distinct from its likeness, the Prada’s touch screen is more frustrating than innovating. Menus are easy enough to navigate with taps of the thumb on well-sized buttons. Punching in numbers on the on-screen numeric pad works just fine.

But other everyday tasks prove cumbersome. Typing a text message requires slow, precise taps which frequently produce unwanted results, while the keys take up so much screen space the message itself is confined to a minute box on top. Scrolling down pages is finicky and using the web browser is a slow and difficult to navigate experience.
The phone has most of the features one can expect in a pricier handset. A passable 2 megapixel camera with video recorder will serve its purpose for MMS but your photo collection. The MP3 player works fine, as does the FM radio and handy voice recorder. Office utilities include a calendar, calculator, converter, world clock and memo taker.

The touchscreen menus, while simple to use, are uninspiring. For a phone that puts most of its weight into aesthetics the interface is dull – predominantly in black and white, utilitarian and low-res. For a device that looks so sexy turned off, it is decidedly less appealing in use.

What are you getting for the price tag? Compare the Prada to other phones it its price range – LG’s own Viewty is in the same bracket and a step up form this device. The Prada’s camera is dated, its list of features is short, and its usability lacking.

To speak plainly: you are paying for a slick-looking iClone with an uber-fashionable brand name on the front. Although the casing looks good, it feels cheap: light plastic with a number of buttons around the edging that could have (and should have) been included in the touchscreen menus. For users who want extensive features seen in Nokia N-Series devices or comparable Sony Ericsson’s, you will not find them here. Even the average user who will only use the phone for rudimentary tasks like calls and text messaging will be frustrated by the ponderous touch response and boring interface.

I would not want to appear unduly harsh towards the Prada. It does have many appealing facets, notably its slim, eye-catching design and trendy touchscreen. It has a useful MP3 player and camera. It has Prada in big silver letters on the face, a fact which will sell many devices in its own right. But using the phone is laborious. The touchscreen still has a way to go before it will pip the trusty keypad, and, unfortunately, the Prada shows us why.