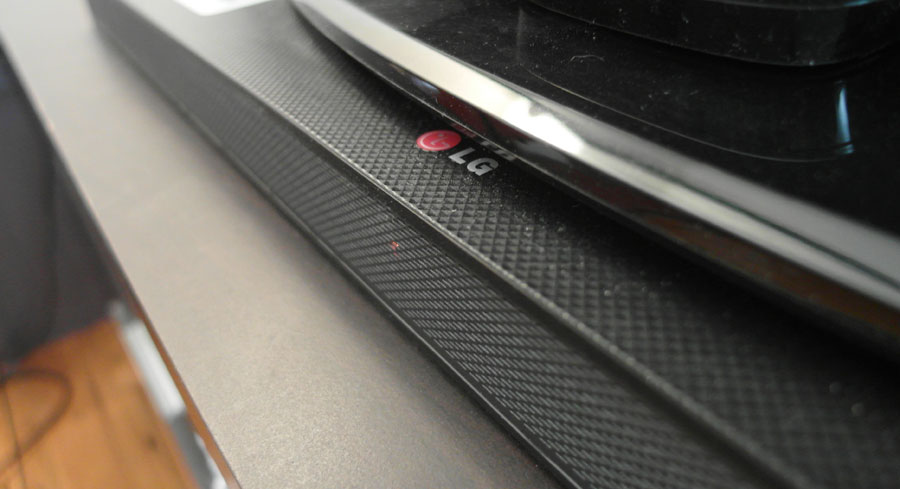 If you need great audio but you don’t have a lot of room, soundbars may well be the thing for your living room. But hold up a second, because while a bar of sound might be ideal, LG’s idea of a plate of sound that sits under the TV might be an even more discreet way of playing your movies and music.

The name LG has never really fit together with soundbar, with the brand releasing various sound systems over the years, but never really taking the time to jump into the “home theatre in a long block” category that we now more commonly call soundbars.

And now it is, but with a different interpretation on how a soundbar should look and feel.

But it’s not just doing that, as the LG SoundPlate takes four neodymium speakers and two downward firing subwoofers and throws them into the 35mm tall block body.

Connections in this thin and wide soundbar are limited, with merely an optical port taking the wired sound, and Bluetooth being used for wireless audio. There is only a power plug after this.

A remote is also included, and this allows you to jump between the optical of your TV, and wireless Bluetooth streaming, while also changing volume, switch on LG’s “Cinema Sound” mode which increases dynamics, use an LG TV specific mode, and mutes the volume completely.

It’s fairly flat, but as thick as some other soundbars, and yet covers more space.

What is it? It’s LG’s SoundPlate, an idea that encases four speakers and downward facing subwoofers inside a plastic body, strengthened to take the weight of a television sized up to 55 inches.

If you have anything bigger than a 55, the SoundPlate isn’t for you, but if it’s 55 and under, the SoundPlate has been designed to take the weight of the TV and press is down on a rectangular block with softened edges that measures 35mm thick and contains speakers and subwoofers, effectively hiding the speaker in plain sight, and meaning you don’t have a long block sitting in front of the TV like you do with other soundbars.

Aesthetically, the design on the SoundPlate is simple, with a basic black edged box and silver speaker grill in the centre, with this speaker following around the edge of the speaker on the sides, fading into the black frame at the end of the left and right sides.

Behind this grill is four speakers, with two along the front, and two close to the corners and sides, effectively producing a four-channel sound system.

But four channels is hardly enough for a home theatre, and taking the part of the point-one (.1) are two down-firing subwoofers on the bottom of the SoundPlate, bringing the speaker system up to 4.1, and making it suitable for home entertainment.

Plugging it in is just as easy, and with only a power plug and optical audio cable, it’s not exactly a difficult process. From here, you’re ready to go, so just switch on the TV, the SoundPlate, and start listening to audio.

To test this new style of soundbar — and that’s what it is: a soundbar in a plate that sits under a TV — we ran music over Bluetooth from our mobile phone handset to test its music side of things, and then let a few movies push through it.

Over on the Bluetooth audio side of things, the plate was easy to get working with our HTC One phone we were testing with it, and from there, it was just using the SoundPlate to play back audio over Bluetooth.

Depending on the track, we found the subwoofer was overpowering what was being played through the regular speakers, which is something that is unfortunately completely out of your control on the LG SoundPlate.

During Laura Mvula’s “Green Garden,” the highs and mids were clear and precise, and Dave Brubeck’s take on the West Wide Story piece “Maria” was solid through the mids too. But head into some pop and rock, and the subwoofer’s issues with heavy bass take over, and in “Radioactive” by the Imagine Dragons, the bass was clearly heavier than it should be, shaking the entertainment unit holding our TV and SoundPlate, and generally sounding creaky at the same time.

Overall, the music lacked a richness we like to hear out of speakers, though, and it’s something we’ve identified in at least one other soundbar, and something the SoundPlate didn’t quite have.

That’s not to say the music from the SoundPlate was bad, and it wasn’t tinny either, it just lacked a certain warmth. It’s as if LG has put all the right parts there, but they don’t sing as well as they could.