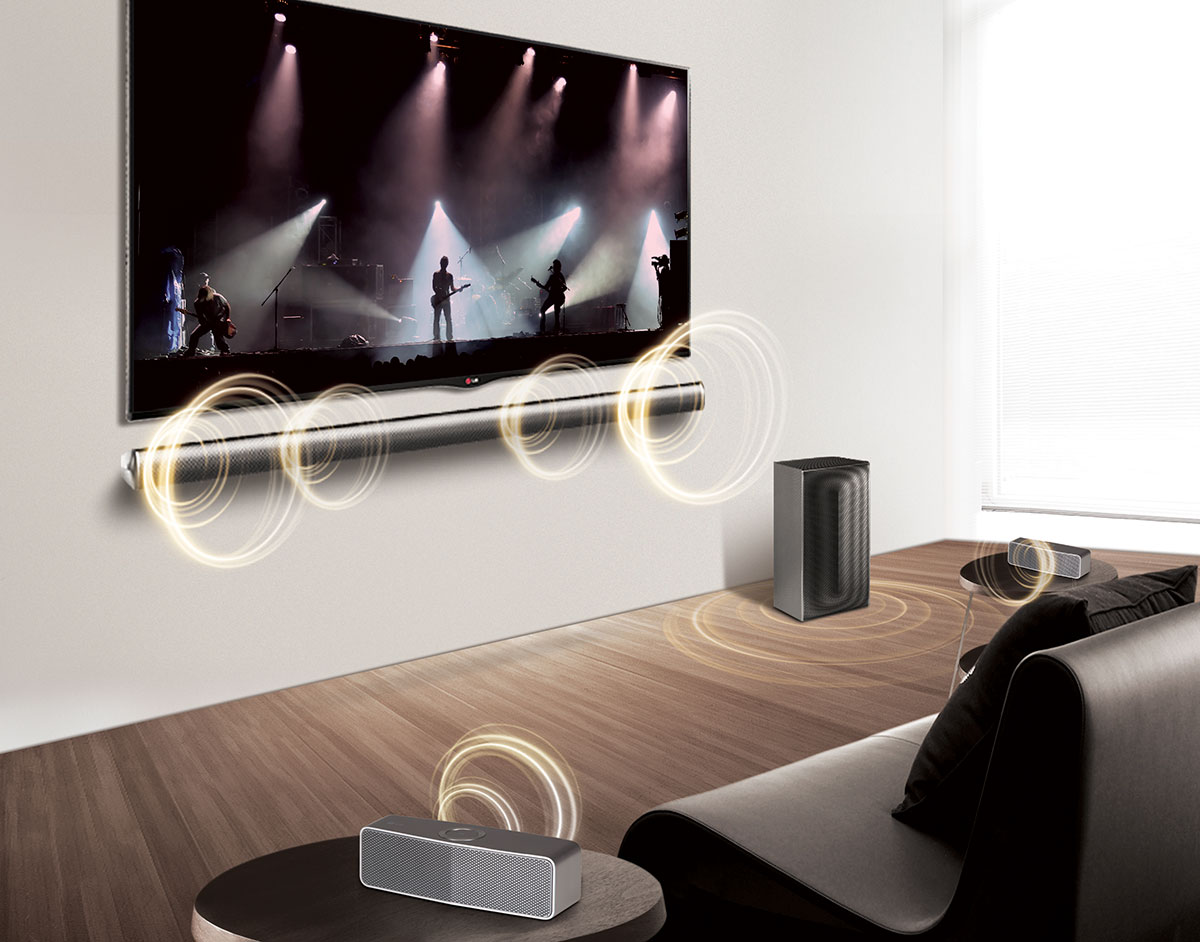 LG to make multi-room magic with soundbars and portability

It’s taken a few years for companies to pick up on the battleground that is multi-room audio, but that looks to be the next place LG will be playing for keeps, not just settling with one or two speakers, but going the full hearing hog this year.

Last year, we saw LG take a peek into the world of multi-room audio, joining Sonos ahead of them and Samsung just in front, but while last year’s assortment of three speakers got LG into the area, this year it’s about rigging up the rest of the home.

“Our 2015 AV accessories, such as the all-new soundbars, truly make all the difference in your overall home entertainment experience,” said Lambro Skropidis, LG Australia’s General Manager of Marketing.

“At LG, we get that our customers have varying preferences and priorities, so that’s why our new AV line-up offers such a wide range in power, features and pricing to suit all needs.”

The range starts with the first of the lot Skropidis mentioned, which are a collection of soundbars, or all-in-one speakers for people who would prefer to have one long speaker under their TV instead of four, five, seven, or nine setup around the home.

For LG this year, that product category includes six models ranging in price from $249 to $1299, and delivering anywhere between 120 to 700 watts of power, with three of the models — the LAS650M, LAS750M, and LAS950M — including support for the LG multi-room system known as Music Flow.

Aside for that, you’ll also find support for Google Cast, making it possible for Android phones to send audio to the speaker this way for Pandora, Google Play, Rdio, and more, instead of relying solely on Bluetooth for streaming.

We haven’t heard if Google Cast will be brought to LG’s current Music Flow speakers — the H3, H5, and H7 — but we suspect it can’t be too far off, as it really would likely just need a firmware update, and that can happen all too easily.

What we do know is that a new LG speaker will be arriving soon, the H4, which is a portable speaker with its own battery that can work like a conventional Bluetooth speaker.

Better, if you end up grabbing one of the Music Flow-compatible soundbars being released this year, you’ll find the H4 works as a rear speaker in the Music Flow environment, meaning you can throw in several rear speakers if needed when you’re watching a movie, and then take them out to use around the house when the movie is over.

“We’re confident that even if you’re a self-confessed audiophile, a gaming fan, a movie buff, or just someone who wants to boost their TV sound to watch the big game, we’ve got it covered,” said Skropidis.

So far, it feels as if the whole multi-room area will be LG’s playground this year, and while we’re intrigued by what’s being offered, one feature definitely has our attention, and that’s a concept called “motion play”.

This one relies on your phone, and if you have Music Flow speakers, will take advantage of Bluetooth LE to work out what room you’re currently in, and sending music to that speaker.

Currently, sound systems generally work via what is called a “party mode” whereby all the speakers in a multi-room system switch on and play synchronised music. For instance, you could be having a party, and no matter where you go in your home, if there’s a speaker in the living room, the kitchen, and the bathroom, the music will be playing there at the same time, allowing you to hear it no matter where you go.

Motion Play is similar to this, but instead of having all the speakers switched on and playing music, the speakers instead switch on and start playing based on your proximity to them, potentially saving power in the process.

You’ll need a Bluetooth LE enabled phone to make this work, though that should be a good lot of phones made in the past couple of years, as this isn’t a completely new technology for phones.

We should see Motion Play arrive in Music Flow speakers shortly, with the H4 arriving in stores by April 20 for a recommended retail price of $279, with its brothers already available in the $249 H3, the $399 H5, and the $549 H7, with these last three lacking the portability and needing to be plugged into the wall to work.