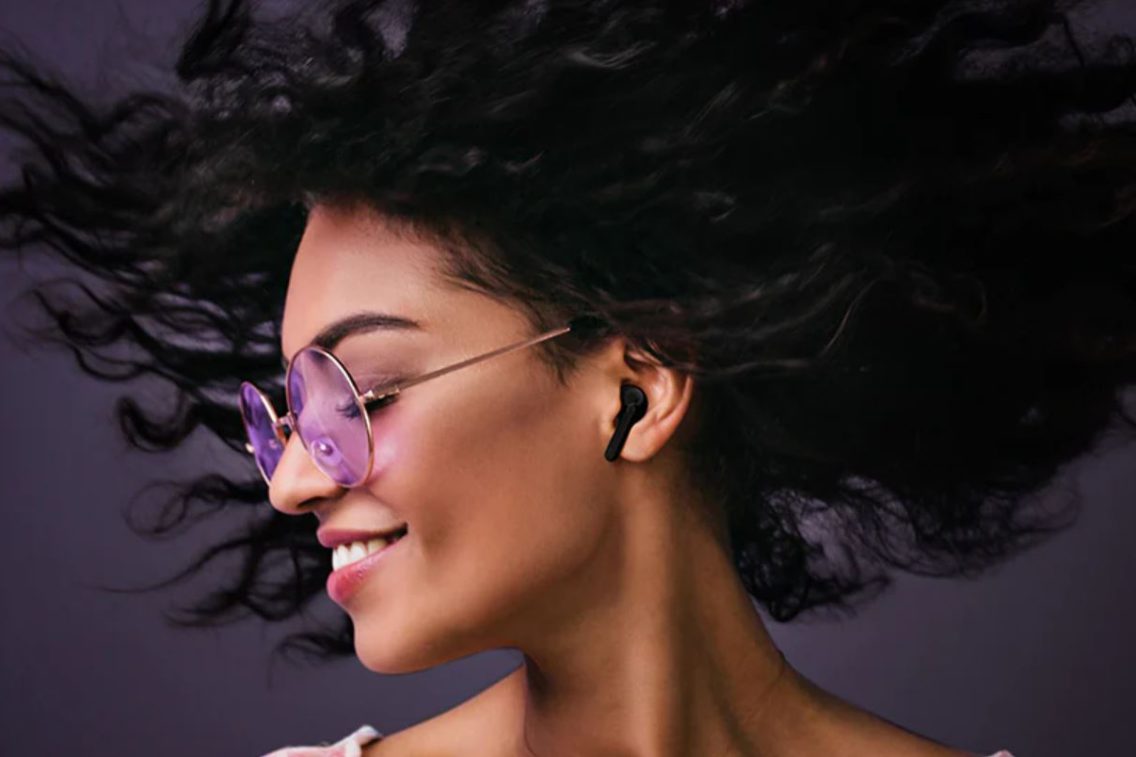 It is so tough to differentiate between the plethora of earphones that it is refreshing to see LG take the lead with the LG Tone Free FN7.

But we have to challenge the use of the word ‘clean’. The UVNano ‘sterilises’ the inner ear tip and the buds and tips still need cleaning. Yes, we are being picky.

Interestingly these are essentially the same as the LG Tone Free FN6 earphones reviewed in October 2020 but have addressed most of our issues. The review gave them a pass mark of 8/10 because, for the price, it was competing with far more fully-featured earphones like:

The LG Tone Free FN7 adds to the FN6

Apologies – as I have said before, I think ear storks, a.k.a. Apple AirPods are the worst fashion statement since plaid trousers. But to LG’s credit, the storks are subtle and make it easier to pick up and insert. So, I won’t deduct points for storks.

The case is small and round – kind of like a thickish lady’s makeup mirror compact.

While it uses BT 5.0, we could not get multi-point connections – having to clear BT with the pushbutton before pairing with another device.

We can only surmise that the same issue happens with any BT host device.

The LG TONE Free app for Android and IOS

The App is necessary to get the best from the buds. However, it does store the settings on the buds, so if you change settings it moves with them. It has an EQ with two custom settings, ANC high/low/off/ambient noise (or press and hold the button on the bud).

Unfortunately, there are no in-ear audio prompts, so you only know ANC’s state in the App. You can change some touch button settings. Voice assistant is via the smartphone.

Sound isolation via the correct size ear tip is 90% of the ANC and sound quality battle. Too loose, and you let too much ANC pressure escape and too tight, and you can cause pressure on the eardrum. The silicone ear tips are OK and have internal spiral ribs to help expand in the ear. But we were not entirely satisfied with the seal regardless of the small, medium, or large tips used.

ANC controls offer High, Low, or Off. The High setting helps reduce, but not eliminate, a Steel Series ‘clackity’ keyboard (higher frequency), but it was not all that effective on voices, TV, and lower frequency, bass-heavy noise. The reduction is similar to most others – dulling rather than cutting out loud noise.

Ambient mode lets the outside noise in, but it sounds slightly synthetic. It also lacks a hear-through feature that amplifies your voice, and those speaking to you – the Jabra are excellent there.

Comfort and fit – light, but you need a tight fit

It is an easy fit because the silicon ear tip sits in the top of the ear canal, and the body sits inside the outer ear. There is only one way to insert them – stork down – a bonus. Add to that the 5.4g bud weight, and the buds are pretty comfortable.

We did a full day test – interrupted at four hours for a recharge – and can report no ‘hot ear’ or other issues.  The buds were relatively stable during hour-long walks. But during an hour-long light workout, the buds needed several push-ins as it became clear that music quality enormously drops if the buds are not correctly seated.

You must use the supplied tips as the case fit, and UVNano treatment depends on it.

How do the FN7 sound? – needs tweaking via the App

Volume-wise – adequate. BT volume via a smartphone is limited to 80dB (about 55dB in-ear), and most of the time, I was listening at about 75% level – certainly, well above 50% used for battery life estimates.

The sound stage is a little narrow – an inevitable function of the ANC and noise isolation. It tends to focus just inside the ears, so the left/right separation is relatively narrow. If you want wide, expansive sound, then the Sennheiser Momentum 2 are for you.

Of course, to an audiophile, it is not – instead a clean slate that neither adds nor subtracts from the original content. So that means you need to use the App to select a pre-set or make up to two customised ones. But many competitor’s amp things up by default because we all like full, rich sound instead of Meridian’s purist approach.

Can the App influence sound signatures?

I want to gently debunk LGs marketing hype of ‘roaring bass’. Why? The Bass pre-set did almost nothing to the native sound. But then nor did the other App pre-sets – immersive seemed the best setting for the jazz I like.

You can tweak the EQ, and it will bring up high-bass (100-200Hz) to almost ‘warm’, but you also need to boost the mid as well, or you get a muddy sound. And then you need to boost 4-8kHz low/mid-treble to get some character back into the music. So, it ends up flat – albeit amped up.

You cannot change the EQ settings during music playback (YouTube and Spotify) as the music stops playing – a significant oversight.

Now I respect Meridian, and I think its work with LG soundbars and speakers has been exceptional. But I suspect that for Joe and Jane Average, its Tone Free tuning should have been a bit brighter and bassy.

As such, these are behind the ‘perceived’ sound quality of its competitors. With EQ tweaking, it is far better but not class-leading.

A vast improvement over the FN6 with the extra mic to reduce echo and ambient noise. But the lack of a ‘side-voice’ means that you feel a little disconnected from the call. Callers said I was a little muffled, and there was, on occasion, unexplained static.

LG claims five hours with ANC at 50% volume. We found that closer to 4 hours. And you have two refills in the charging case. Fast charge is 5 minutes for 60 minutes, but a full charge takes just under 50 minutes. The charging case takes about one hour to go 0-100%.

As it is Qi, it will wireless charge on any Qi pad and reverse charge on selected Samsung Galaxy S20/S21 and OPPO Find X3 Pro phones.

We gave the 2020 FN6 an 8/10 pass mark because it met all test parameters but was outclassed by its competitors. The FN7 is not so much a quantum leap forward but adds things that it needs to compete, and the price reduction makes it decent value from a good company.

Rating them is more complex. Why? Late last year, I took over from Thomas Bartlett to review in-ear earphones. I now have a far better appreciation for what makes good, better and best.

Its USP, UVnano sterilisation could be important for those with sensitive ear canals etc. It is also something that the South Koreans are amazingly into at present – clean everything. Add to that pretty good sound, reasonable battery life, Qi charging, and these are worthy of consideration.

But that is not enough to overcome ‘average’ performance. It rates behind Jabra (best all-rounders for codec support), Sennheiser (best sound), Sony (not yet rated but well up there) and Bose (best ANC at the slight expense of sound). So it is not the class leader apart from cleanliness is next to godliness.

LG TONE Free FN7 Wireless Earbuds
The LG Tone Free FN7 are good all-rounders at a reasonable price. UVNano is interesting and may ring your bells but it is not a class-leader in sound signature, ANC or battery life.
Features
9
Value for money
9
Performance
8.5
Ease of use
9
Design
8.5
Positives
Comfortable for long term use
Fast charge is handy - 5 minutes for 60 minutes play
UVNano sterilisation but does not remove the need to clean
IPX4
Ambient noise pass-through is suitable for walkers that need to know surrounds
Hands-free calls has improved over the FN6
Negatives
Poor sound quality if not using the App
Poor sound quality if you have the wrong size ear tip or it moves out a little
No ANC or voice assistants without the App
Exercise will lead to frequent readjustment – care to have a good fit
Finicky touch control improved over the FN6
SBC and AAC codecs only – Qualcomm aptX or LDAC not supported
Not BT multi-point
No internal voice announcements
8.8
Buy on Amazon