LG TVs get thinner and more pure in colour 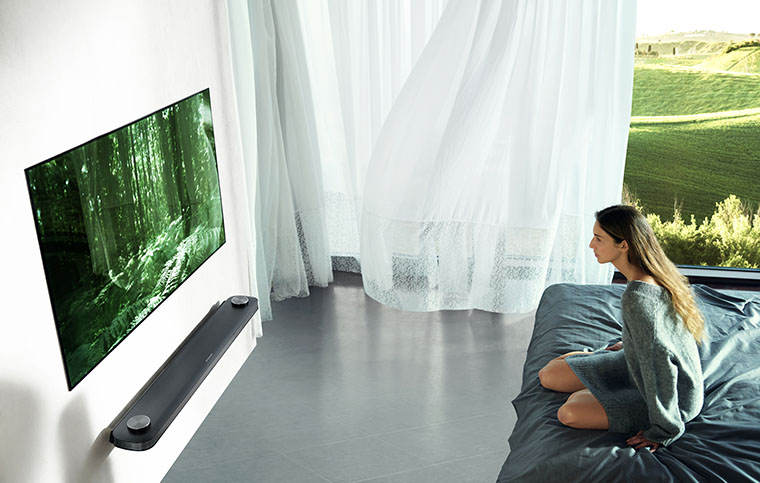 Today Korean giant LG Electronics showed off a range of premium sound and picture products which will be appearing in coming weeks.

The highlight was its new W series OLED TV. Now, we know that one of the virtues of OLED is that the panels can be very thin since each cell produces its own light, rather than sitting in front of and controlling the transmission of light from a separate backlight. But of course there are structural issues here. Make a large panel too thin and there’s a good chance it’ll shatter just when lifted by its corners. The W Series TV is just 2.57mm thick. Let’s say one third of the thickness of a typical smart phone.

Do It With Magnets

LG’s solution: affix it to a wall bracket. With magnets. Of course.

Naturally the wall plate adds its own thickness to the whole, but nonetheless that whole remains at just four millimetres thick. LG says that the “W” naming this series stands for wallpaper, or window, since that’s somewhat like its appearance, almost flush on the wall.

There’s no room for anything beyond picture production in the panel, so everything else – panel driver, inputs, TV tuner, sound – has been offloaded to an external, high performance sound bar. One that delivers Dolby Atmos sound using speakers on its top to produce a height effect.

Given the design of this panel, there is no option for standalone mounting. It’s wall or nothing.

If offers, it just about goes without saying, ultra high definition resolution, a virtually infinite contrast ratio, High Dynamic Range picture support and Dolby Vision. But more on that shortly.

As the premium model of the premium models, the LG W Series is far from inexpensive. The 65” LG Signature OLED65W7T – the only one slated for release here so far, will be on sale for $13,499 when it appears in the first week of April.

Notable by their absence are any curved models. None will be launched here. Good riddance, I say. The curve made them look stylish but offered nothing in the way of improved picture quality except, perhaps, for the one person seated right in their “sweet spot’’. To me, curved TV screens were one of those things that they did because they could, not because they offered any inherent advantage.

Where I was situated at the launch I was unable to make a judgement on the first point, but the window beyond the TV gave a good real-world demonstration of the reflection performance. Sitting next to the Super UHD TV was a regular LG model. The light from the window was angling across both screens. At one point I could not even tell if the cheaper TV was displaying an image while it was always clear what was on the Super UHD TV’s screen.

One nifty trick concerned the improved Web0S 3.5 TV interface. Using the “Magic” remote, 360 video content (that is, lool-in-any-direction video shot with a 360 degree camera) could be dragged around on the screen to show all the different perspectives. This demonstration was with material playing from a USB stick. LG plans to have this working with 360 content from YouTube in coming months.

Dolby Atmos is the new standard for surround sound which includes overhead audio steered as easily controllable objects. Several of the LG sound bars – including the one that acts as an extension for the W7 TV – include upwards-firing speakers that allows Atmos to be reproduced.

Finally, while Dolby Vision is available on a moderate number of TV shows available on Netflix – for example “Daredevil”, “Jessica Jones” “Luke Cage”, and “Marco Polo” – and the latest “Magic” remote control for LG TVs includes a dedicated Netflix button (plus an Amazon button!), I still think overall picture quality for streaming services doesn’t quite measure up to Blu-ray, let alone UltraHD Blu-ray.

Fortunately LG will be launching its own UltraHD Blu-ray player next month. Priced at $599, this one will be upgraded via firmware sometime this year to support UltraHD Blu-ray discs encoded with Dolby Vision. Discs conforming to this standard are also slated for release this year. Mr Griffis from Dolby says that Warner Bros, Lionsgate and Paramount are on board with the new higher picture standard, so we can expect serious movies to be appearing which will be able to make full use of the new OLED TVs’ capabilities.