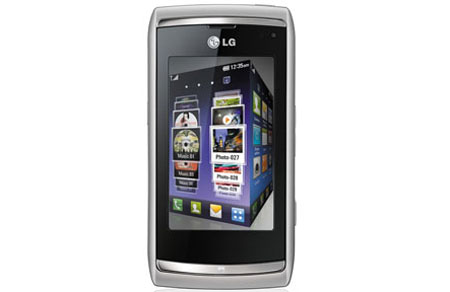 When LG released the original Viewty well over a year ago, it was a stand-out winner and one of the best camera phones on the market. In fact, LG’s first Viewty was such a beauty it still holds its own against rivals today – no mean feat considering the sheer number of smart phones and camera phones released over the past couple of years. So now we have the new Viewty Smart – a slimmer, lighter, update to the original with shiny new firmware and an even better camera. But, as with all things, is the sequel ever as good as the original?

The biggest selling point of the Viewty Smart, as the name suggests, is the camera. At 8 megapixels with auto-focus, the Smart instantly puts itself at the top-of-the-range here – unlike most camera phones, this standard means you can throw out your digital camera and replace it with your mobile. Clearly a lot of work has gone into the camera’s software – on screen menus are a cinch to use and will remind you of a normal digital camera, with the menu function even taking on the appearance of a click-wheel seen on most stand-alone cameras.

Budding photographers will enjoy a raft of ISO settings, different shot modes to catch smiles or even ‘beauty shots’ or ‘art shots’, white balance settings, colour effects, and even geo-tagging. The LED flash is effective for passable night shots, and on-screen menus are well designed and simple to use. Video mode is also a breeze, and the added option of DivX compatibility puts this device ahead of many others.

But for such a high-standard camera, viewing images is a bit of a let-down. The gallery software lacks polish – you can ‘flick’ through pictures with a finger-tip swipe across the screen, but the low-res, grainy previews load slowly and the attempt at a ‘3D’ rotation of images shows the Viewty Smart’s lack of internal grunt. The experience is not good. When you do click on an image for a full-screen, high-res view, each picture takes that little-bit-too-long to load. A shame, because with a camera this good you’d want to be showing off your happy snaps with a bit more flair.

Unlike the original Viewty, the Smart uses LG’s new(ish) S-Class user interface. S-Class is a funky idea: four home-screens on a ‘cube’ which you rotate by swiping your finger across the screen. Different home-screens are used for things like contacts, widgets, and operator menus (like links through to Bigpond and Foxtel if you’re with Telstra, for example). Each home screen is somewhat customisable, but the overall the operating system the biggest hindrance to the Viewty Smart’s usability. Not only is flicking through four different home screens cumbersome and slow-loading, but you’ll also find yourself regularly going into the options menu – essentially a fifth (!) homescreen – to access most of the device’s features. Style over substance, unfortunately.

Besides the high-end camera, the Viewty Smart does manage to pack in a few other features – but it’s a stretch to call it a smartphone. The web browser is so dated it’s barely usable; pages take an eternity to load and when they do, are poorly rendered. In the age of the iPhone, mobile web browsers should be better than this. Especially with a price tag which puts the Viewty Smart up against rivals with much better browsers.

For everyday tasks like sending texts and making calls, the Smart does the job without difficulty. The when rotated into landscape mode, the on-screen QWERTY keyboard performs well for slinging off a quick SMS, but the portrait-mode onscreen numeric keypad can be tricky to get used to. Not as easy as a traditional clickable keypad and could become an annoyance for frequent texters.

The price tag on the Viewty Smart puts it up against some even smarter rivals. The 8.0MP camera means it’s up against competition like the Renoir (also made by LG), a couple of Samsung devices (like the 8MP Ultra Touch), and numerous exceptional Sony Ericsson Cybershot phones. If the camera if the main feature of interest for you, then the Viewty Smart should definitely be on your shortlist – but other camera phones outdo the LG when it comes to other applications and ease of use.

A decent device which should have been far better. The LG Viewty Smart is a real contender in the ‘top camera phone’ stakes, but a real let-down in many other respects. If you’re looking for a top-end camera in a slim and sexy mobile device, the Smart should be on your shortlist. But beware – besides the camera, the Viewty Smart is tricky to use with a dated web browser, unfamiliar menus and laggy firmware. A mixed bag, overall.