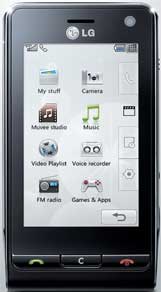 For most gadget-loving punters having a first look at LG’s touch-screen Viewty, two other handsets will immediately come to mind – the much lusted-after Apple iPhone and LG’s earlier effort, the Prada. In reality, the Viewty is set apart from both: unlike the music-based iPhone, LG’s efforts have gone into making a high-end camera phone, and it feels like a natural progression from the fashionable-yet-flawed Prada.

The Viewty is one of the early releases in what will surely be a flood of touch-screen handsets in 2008, and unlike other touchscreens it proves (mostly) easy to use and responsive. For those looking for a touch screen to tide them over until the iPhone – it’s not even close to that standard. But for those looking for a sexy, functional camera phone, the Viewty is an impressive offering.

The Viewty comes with all the features you’ve come to expect from a high-end phone. An MP3 player, FM radio, voice recorder, web browser, calendar, world clock, calculator, currency converter etc – nothing exceptional, but all simple enough to use and handy to have. The touch screen gently vibrates with each touch, which proves an invaluable feature when compared to the sluggish response of some other touchscreens. Messaging is where the touchscreen stumbles, with imperfect responses and a tiny optional on-screen keyboard.

But clearly, as the name suggests, the Viewty is all about camera features. And it’s one for photography enthusiasts – users can adjust white balance and ISO levels, use the self timer up to 10 seconds, 16x digital zoom, a range of colour tones and presets such as night, sports, and landscape. The camera also has a slew of editing features allowing users to crop and zoom, draw on pictures, add text, add effects like mosaics and sharpening, as well as frames and stamps.

On top of the impressive range of options with stills, the video mode records up to 120fps, giving great slow motion captures which can then be viewed on a TV through a TV-out cable. The VGA capture struggles to give a good image on a decent sized screen but would be more than fine for users looking to upload onto YouTube.

The Viewty stands up well against rivals in this price bracket. It has a comparable 5MP camera to the fantastic Nokia N95, with video editing functions included. Its applications also match high-end Nokia N-series phones and BlackBerry devices with a voice recorder, browser and office organiser – useful, but this is by no means a business device.

The touchscreen is a step above rivals and arguably the best in its class. It is easy to navigate with a thumb and the pesky stylus is rarely needed, thank goodness. And like the LG Prada – it’s sexy. Chunkier than its sibling, but infinitely more useable with a superior design.

LG’s best phone yet. A true step up from the earlier Prada, LG manages to marry cool and usable with noteworthy camera features. The picture quality will not have you throwing out your digital camera yet – but it’s up there with the best camera phones on the market. Touchscreen messaging remains difficult and the lack of a 3.5 mm headphone jack is annoying. But it’s worth the price tag.