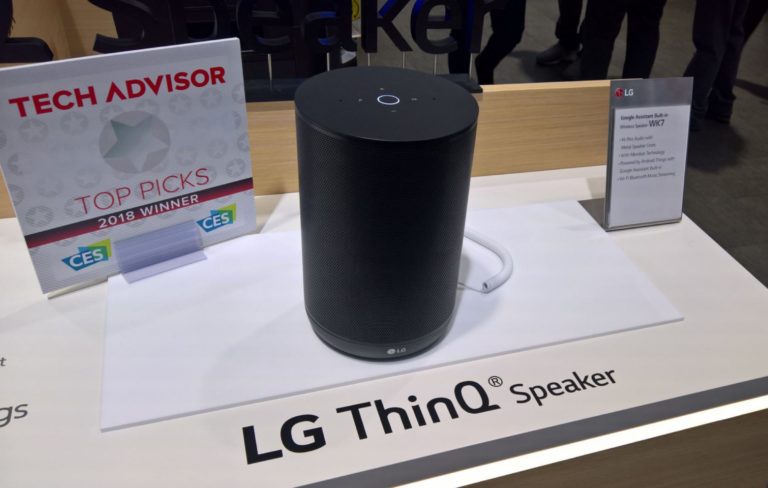 LG has entered the Google Home smart speaker market. The LG WK7 ThinQ provides the most pleasant, easy listening, elegant sound of all Google Assistant speakers we have tested.

GadgetGuy is currently testing ten Google Assistant speakers. While all have Google intelligence in common, the delivery is very different.

If you want to read more about Google Assitant GadgetGuy has a review here.

What is an LG WK7 ThinQ?

It is LG’s tilt at the Google Home ecosystem. It is a 211mm high x 135mm x 1.9kg cylindrical, front firing 1.0 mono, speaker covered in a black acoustic metal mesh. Style-wise, it would not look out of place in most homes.

Two Class-D amps (total 30W) drives a mid/bass woofer and a separate tweeter. It has Wi-Fi AC Dual band and Bluetooth 4.2 using the SBC codec. There is no Aux-in.

The top has two mics, controls for volume and playback. There is a mute microphone button at the back of the cylinder. Four OK Google lights tell you if it’s listening or not.

Oh, and it runs the new use the Android Things platform. This allows developers to make the most of the platform’s capabilities.

Via Google Home app on a smartphone – dead easy.

A separate LG Wi-Fi speaker app for iOS and Android adds some additional features. For example, you can access a DLNA server (for home music), integrate with a 2018 LG V or other LG Chromecast devices. It is also used for Bluetooth setup and can access music services outside Google Home.

Remember this is a 1.0 mono, front-firing speaker. You buy it for Google Assistant and for listening to music sources (like radio) where mono is all you need.

We found it had the most elegant, bright, pleasant sound of any current Google Home speaker. At $299 it is the one I would choose if money were not an issue (compared to the Google Home at $199).

There are many reasons why the LG WK7 ThinQ sounds so good.

British company Meridian Audio does the tuning. According to LG, this adds ‘incredibly impactful and realistic sound’. We agree.

Lower rate sound content can upscale from 22/32/44kHz/16-bit to 24-bit/96kHz. Interesting and perhaps overkill for a mono speaker. But it is what makes it sound so good.

The tuning has two pre-sets – enhanced bass and a clear voice. You can use them together, e.g. reinforce bass and mids or separately. Or you can turn them off for a mid-biased speaker. Frankly, I preferred both off as the equaliser does not make a massive difference to mono music.

Frequency response is claimed to be 50Hz to 18kHz. Our meter confirms this. The maximum volume is 80dB with minimal total harmonic distortion. While we test all speakers in an ‘open space’, this could benefit from being placed in the corner of a room or on a bookshelf.

With Google Assistant integrated directly into the device for quick setup, LG XBOOM AI ThinQ responds to a user’s commands without the need for a remote control or smartphone like “Hey Google, what’s my schedule today?” As a hub, the speaker can control Google Assistant-enabled smart home devices as well as LG home appliances compatible with LG ThinQ.

If you want Google Home functionality, this is the one to buy. It does everything the Google Home speaker does but adds a better sound quality, Bluetooth, and an app for use outside the Google Home environment.

You may have heard that the Google Home speaker lacks fidelity (and to be fair it does but is more than fit for purpose). The LG WK7 ThinQ does not. It is the one to buy for the best, easiest listening sound reproduction.

I think the LG WK7 ThinQ is the class-leading mono Google Home Speaker.

As a Google Home 1.0 mono speaker

$299 from most major retailers. If you shop around you may even find it for $249! Bargain.

Overall
Features
Value for money
Performance
Ease of Use
Design
Reader Rating0 Votes
The best sound bar none of the Google Home mono speaker crop
None really - no deal breakers
4.4