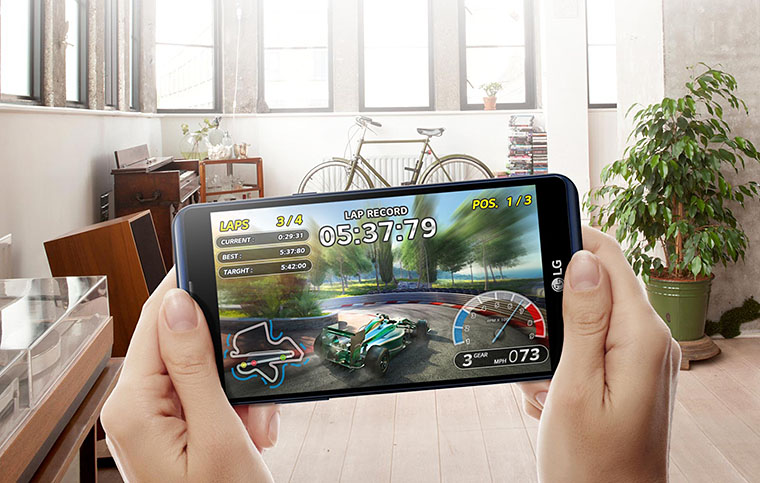 I find LG a little hard to understand sometimes. It certainly has innovative new features in its (now two models of) premium phones. But it keeps on introducing features to its lower priced models that might well be of interest to premium buyers, were they included in those phones. So the moderately priced LG Stylus has a DAB+ radio built in. And the model I’m looking at here, the LG X Power, has a very long battery life, primarily by dint of putting a whopper of a battery into it. Neither of those appear in a premium LG.

Perhaps you just can’t fit a big battery into a phone with other premium features.

The LG X Power is a budget phone with a mixture of useful features with some possibly significant limitations.

The battery – it’s not removable – holds a charge of 4100mAh, which is at least one key to long life. Phones batteries are typically around 3000mAh or less. Despite the capacity of the battery, the phone manages to just 7.9mm thick and it weighs 139 grams.

The rear seems to be plastic, but it’s softly textured and well supported by the body, so it looks and feels quite classy. The glass of the screen is inset into the frame. Barely, just enough to be detected with a fingernail. The volume controls are on the left. The power button on the right. The “Home” button is soft and it, along with the back and apps button use up a portion of the display.

LG Australia doesn’t seem to mention much about the screen apart from it being a generously sized 5.3 inches (13.5cm). I determined that the screen resolution is what you expect for a phone in this price range: high resolution at 720 by 1280 pixels, but not Full HD. It does not say what kind of glass is used on the display. (Some US versions of the LG X Power specify Corning Gorilla Glass 3, but they have enough differences to possibly be quite different phones.)

Inside it is powered by a quad core 1.3GHz Mediatek MT6735 processor. The amount of RAM is not stated, so I guess it’s nothing to boast about. It comes with 16GB of storage, but a microSD card slot supports additional memory, up to 2TB if and when such cards become available. It runs Android 6.0.1.

The phone comes with a fast charger and very uncomfortable looking earbuds/microphone. The built in speaker is on the back, so its sound is often muffled just by being placed down flat.

As I am writing right now, it’s just a little after 1pm on Friday. The LG X Power phone is showing 24% as the amount of charge left in the battery. I always set phones to display percentage. Don’t you?

The last time it saw a charger was when I unplugged it at 7am on Tuesday morning, 78 hours ago.

Now, I’m not a heavy phone user. I talk to someone for maybe five minutes a day on average, and only send and receive a few texts daily. But I do frequently consult various apps for online information, and I did do quite a bit of setting up and then updating apps, and a little bit of game play in that time.

To give a sense of things, I rarely challenge the battery of my Samsung Galaxy S6 in a single day. On a very quiet day I go to bed with the charge down to 70%. On a busy day, perhaps 40%. With usage like I’ve been using the LG X Power, I’d say below 50%. The phone would have been cactus by Thursday morning. Which is why I charge it every night.

Let’s take another day. It was a weekend. In the morning I checked my email first thing, and spent ten minutes checking social media, playing a couple of short videos. Checked my bank account and another financial site I monitor. Then, throughout the course of the day the phone spent its time in my pocket, only being checked every few hours for email. Then I spent ten minutes checking its OTG – On The Go – compatibility. Would it play music to an external DAC using its built in music player? Check. Would it read external USB storage plugged in via an OTG cable? Check. Would a keyboard/mouse plugged in via that OTG cable work? Check.

At which point, I noticed the battery was 95% full.

Incidentally, I managed to crash the phone by pulling the OTG cable with USB storage, but that was the only misbehaviour of the phone.

So, yes, the LG X Power is clearly long lasting. And not just due to higher battery capacity, but it also seems to sip a little more sparingly from the battery than I’m used to. Charging is also fast, so if you do manage to use the battery up, you can get going again quickly.

So does that make it a great phone? No, it makes it a long-lasting phone. Other aspects of its performance speak of its relatively modest cost. The screen is reasonably bright, and reasonably colourful, but rather less bright and looking rather washed out, colour wise, when put side by side with the S6. As you’d expect.

The rear camera is supposed to be a 13 megapixel model according to the LG Australia website. But the actual resolution was 4160 by 2336 pixels, which works out to be 9.7 megapixels. That’s not too important, really, as a practical matter. With good light, the camera took a very nice picture. My wife thought better than her iPhone 6. I thought on a par with the Samsung Galaxy S6. With lowish light, it was relatively weak, with soft uncertain edges on things that ought to be in sharp focus and loss of detail and smooth graduations of colour. The app was easy to use, but lacked a HDR (High Dynamic Range) mode, which made for poor handling of scenes with a wide range of lighting.

I dunno, is there something wrong with my arithmetic today? I took a selfie using the no hands/face recognition facility, and it worked just as advertised. However the results were unimpressive. For one thing, the resulting picture was very low in detail, even shot under bright indoor lighting. It was adequate when viewed normally on the screen, but if zoomed in at all, the loss of detail was obvious. For another, rather than offering 5 megapixels of resolution, the resulting images were 1440 by 2560 pixels, which works out to be 3.7 megapixels.

Video recording was respectable, again with good light. You can shoot at 720p or 1080p with AAC sound.

A disappointment is WiFi. It only supports 2.4GHz bands. I guess this won’t bother some, but I have a lot of devices so 5GHz band support is important.

Apart from that, the phone fared well. Video playback was strong. Scrolling down facebook was smooth. The screen was responsive to my touch and rarely did an action require repeating. According to the Quadrant benchmark test, its total performance was less than a quarter of that of the Samsung Galaxy S6, which I’m using as a kind of reference point. Display – 2D and 3D – and memory performance were comparable. It was in/out (57%) and especially CPU (17%) where the differences were large. Yet the phone didn’t act like that, and I’m profoundly distrustful of the assumptions built into benchmark tests. So I report this out of duty, not confidence that it means anything.

To me, it seems that the LG X Power is for someone who wants a phone that can endure a lot of use in the day, and isn’t too fussy about photography, despite LG pushing the auto selfie angle. Importantly, it doesn’t look at all cheap so users won’t be embarrassed to pull it out in company, unless that company is devoted to Apple.