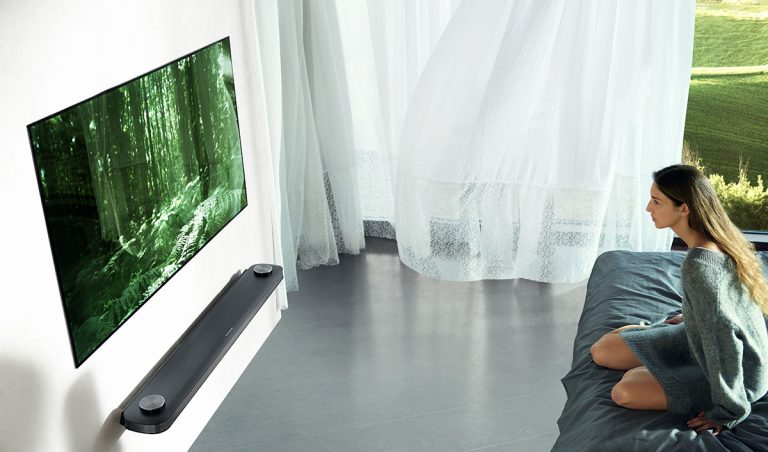 A while back we mentioned LG’s Signature W7 “wallpaper” TVs. They are LG’s very top of the line OLED models, and are in large part distinguished by being designed to fit flush on a wall, held by magnets. Then there was only the 65 inch model. Now there’s a giant 77 inch model.

We’ll get to how much this will set one back in a while – don’t look yet! Take a guess as you read on and see how close you get it.

The trick LG has employed is to eliminate the customary electronics bump at the bottom rear of the TV. That way, the TV only needs be as thick as the screen, plus whatever structure is needed to ensure it doesn’t break. That, it turns out, is six millimetres, including the magnetic wall mount. The thing is as close as you can imagine to looking like a window in the wall rather than a TV hanging on it.

Those electronics are offloaded to a fairly high end sound bar, which includes support for Dolby Atmos sound. You’d typically attach that to the wall underneath the TV’s panel. The two are joined by a single ribbon cable.

Just a reminder: OLED stands for Organic Light Emitting Diode. The subpixels in an OLED TV don’t work by blocking the passage of light from a backlight (which is what LCD TVs do, including so-called LED TVs). They generate their own light, just as the cells in plasma TVs used to. But OLEDs are far more controllable, so they can be smoothly turned up and down in brightness, all the way to completely off.

A small number of very carefully designed LCD/LED TVs come close, but no other technology can yet match them for the depths of blacks that they can produce. And that gives a very solid foundation for a strong colour performance.

They are available now in, LG tells us, selected Harvey Norman stores nationwide.