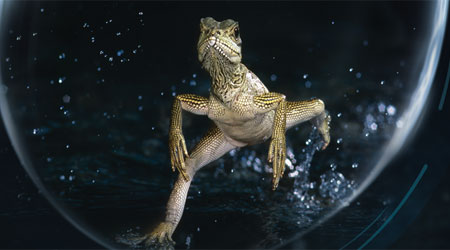 Taking four years to make and absorbing nine years’ worth of filming, ‘Life’ is an extraordinary and fascinating look at life on our planet, narrated by Sir David Attenborough – the undisputed heavyweight champion of natural wildlife filming of the world – and a veritable institution in his native UK, where this was originally aired as a 10-part TV series on the BBC.

The four-disc set is available on DVD and Blu-ray, and if you want to witness the extreme behaviour of real-life (Komodo) dragons, fish that fly and walk on land, cross-dressing giant squid, cheetahs that team up to overwhelm a much bigger prey, and fearsome killer whales that risk their own life and limb to venture into the shallows to grab a meal, ‘Life’ has it all.

Much of the footage is of the ‘how on earth did they film that?!’ variety, showing extreme close-ups of the some of the world’s most dangerous animals, dramatic attack sequences and the most desperate, intimate fights for survival.

There are no amazing bonus features on the Blu-ray set that aren’t on the DVD – and only a segment called ‘Life Diaries’ on that one – but with photography as stellar as this, it would be a crime not to grab yourself a copy of the Blu-ray version if you have a compatible player and large screen TV.

Special kudos here to Roadshow Entertainment for releasing this TV treasure and offering what must be one of the best Christmas presents you can possibly give to anyone interested in nature and life on Earth.

Max Everingham is the owner of Game State, a B2B videogame software analysis & marketing consultancy. Max is a videogames veteran, having worked in the industry since 1996, including senior brand & product marketing positions at EA and Codemasters.
Overall
Reader Rating0 Votes
5