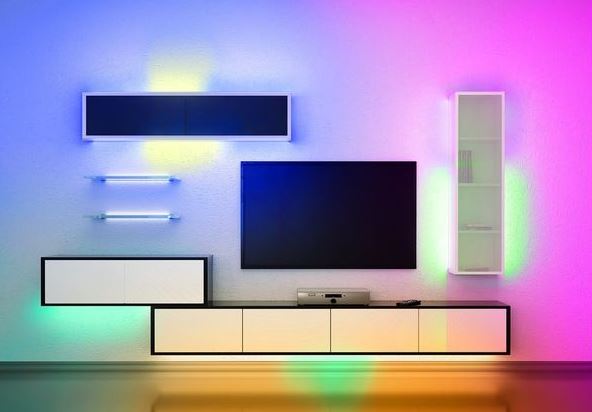 We have been crusading the #Stop the energy rip-off campaign, and we are pleased to add LIFX Wi-Fi Z strip, and its Wi-Fi LED bulbs to our lists of must-have energy-saving devices.

The LIFX X Wi-Fi Z LED strip is a 1m long, thin, self-adhesive strip of RGB and White LED lights that can dim from 0-100%, and display 16 million colours and temperatures from 2500K to 9000K in eight zones. You can join up to ten strips for ten metres and even make up to 90° bends in the strips.

But the thing I like most about the LIFX X Wi-Fi Z LED is, “OK Google, turn on Z”. It can use Alexa or Siri as well.

Before you think about buying a LIFX Wi-Fi Z strip think about how you can use it. Caveat – they are not waterproof so that rules out the bathroom or outdoors.

First, each 1m strip can generate up to 700 lumens (dimmable) without glare or blue light. That is for a paltry 8W of power (at 100% brightness) – roughly equivalent to the light output of a 45W incandescent bulb.

Second, you can voice control them so no more fumbling for a light switch that could be metres away. Remember that these have no ‘reflector’, so you are bathed in light emanating from the strip/s.

It could be as

My point is that light need not come from a single bulb (as we are conditioned to believe) and if you think about it you will start to see where energy-efficient, stick-on lighting strips may improve lighting, safety and convenience. Just add a powerpoint.

Then you can clean the surface to apply it to (alcohol sachet provided), remove the 3M self-adhesive backing and stick. Simple but the adhesive is there for keeps!

My only issue is that the 1m strips don’t have a locking joint mechanism and its very easy to pull them apart. And you can’t screw them to a wall. A: use some sticky tape over the joints and clean the surface thoroughly – it does stick to stay!

You can cut the strip to a specific length (like the Philips Hue Shape Light).

Zones – via the app

I really like that you can address up to eight zones per strip (via pre-set themes) so you can tailor the light strip by brightness, colour and degrees Kelvin. For example, you may want 100% over the kitchen sink and 50% over the bench – no wasted energy here.

Or if you are using it where you do not want to see LEDs in front of you then turn those zones off.

The app also allows you to use pre-set themes, schedule light times and more.

We are testing Z as an over the kitchen bench lighting strip so it is activated by “OK Google turn on/off Z at 50% warm white”. When we are washing up, we increase that to 100%.

I know that a few will gag at $129 for 2m, but this is the cost of energy-efficient lights. A Philips Hue Shape strip is as similar price.

LED Lighting, especially standard Edison Screw and Bayonet cap white-only lights are now about $30, but the colour versions are still up at around $90 (and some need Zigbee hubs as well).

Yes, these will save you big energy bucks over incandescent, CFL or halogen lighting so using them sparingly to replace these lights it is a no-brainer.

An Australian invention, long-lasting, low energy, low blue light setting with many uses. It does not use a hub. I love the voice activation.

A hub can be handy if lights are out of Wi-Fi range and Philips Hue has its place too.

Which brings me to the statement about Wi-Fi setup. Early reviews of LIFX products commented on Wi-Fi dropouts. It was not so much the light but the Wi-Fi at fault. If you have an underpowered router (you need Wi-Fi AC 3600+ or Wi-Fi AX or a damned good mesh system with at least AC2600 coverage), then you will subject any Wi-Fi device to the vagaries of the router and the internet. Poor routers and Wi-Fi connections account for all the ‘slow’ response comments.

When I was having major issues with Telstra NBN experiencing from 3-300 dropouts a day (and it is Telstra’s fault but more on that in another article) anything Google or Alexa based was totally unreliable. We would have to reset the router, reboot the Philips Hue hub and reinstall LIFX and other Wi-Fi connected products – until the next day, and the issues would start over.

So read our Mesh Tutorial and heed our advice that whatever router you have, make sure it has correct placement, adequate power to support all the IoT devices and covers the areas you place them in. You can extend the coverage by using extenders or Ethernet over Power etc.

Not wanting to brag but I have no issues with over 40 IoT devices in a three-bedroom home with either the D-Link AC5300 router or NETGEAR’s new AX6000 AX8 router. Let me tell that you before these our experience with mesh was a disaster.

Features
Value for money
Performance
Ease of Use
Design
Reader Rating1 Vote
No hub required but too many Wi-Fi devices can clog your home network
Eight addressable colour/temperature zones per 1m strip
#Stop the energy rip-off - power efficient
Needs to the app for full functionality – voice control is limited
Can require a reset after a power or internet outage
4.4