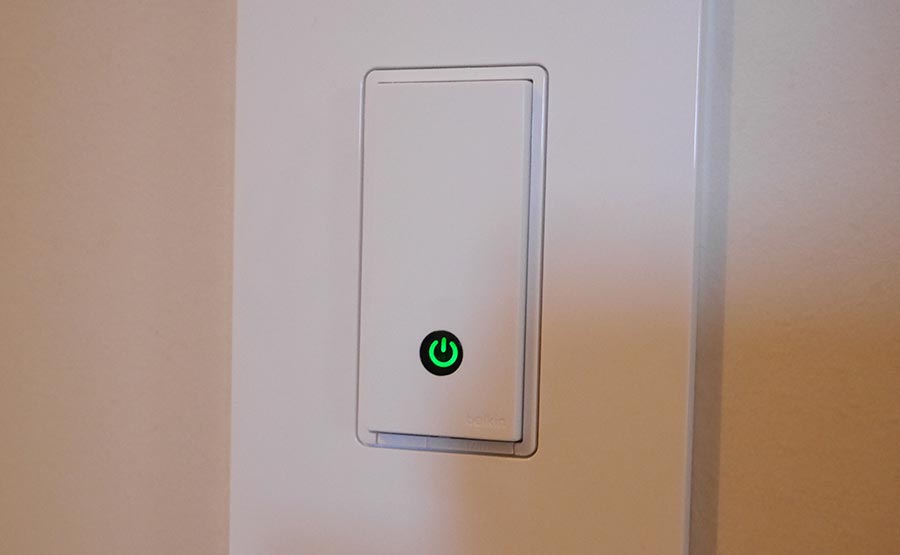 Imagine being able to enter your home and never have to reach for a light switch, with your house upgraded to be able to determine that your presence means lights are on. That future is now possible, and Belkin has demonstrated how.

The products needed for this are a few, and comprise of cameras and motion sensors, as well as a new gadget which will replace your regular old button-based light switches in your home.

This replacement is actually more of an upgrade, as it takes the old style of light switch and gives it the ability to connect to a wireless network, working on conjunction with Belkin’s WeMo products and a set of rules that you define based on things the sensors in your home pick up.

When this camera detects you...

For instance, if you have a camera in the front of your house and it picks up on you coming home after dark, the lights will switch on automatically, as a rule from that camera can determine that yes, you’re home, and it’s time to switch on the lights where you need them,

As you walk to different areas in your home, a motion sensor and camera may work together to turn on other lights, effectively creating a more intelligent home.

“The WeMo Light Switch continues the benchmark we have established for the WeMo range, which is to deliver a simple, easy to use and affordable home automation solution,” said Brendan Sparks, Head of Product Management at Belkin in Australia and New Zealand.

“The WeMo Light Switch delivers peace of mind from knowing you can control and monitor your home from wherever you are, whenever you want.”

The sensors can even be setup to work based on sunrise and sunset information, and while the light switches are the new products, these rules can also be timed with other Belkin WeMo connected products, such as the WeMo Switch, so that any product connected by a power plug can be timed for usage, such as turning on the fish tank lights when it gets dark.

Lighting can also be controlled via an app on iOS or Android devices, though a web-based version was coming for other operating systems down the track. Controlling the light switches even works when you’re not at home, so you can give off the impression that someone is, acting as a form of home security.

Belkin’s Light Switch will be joining its other WeMo products in stores shortly, with each switch retailing for $69.95, and while people can install it themselves, Belkin has partnered with Jim’s Electrical for those who find the idea of fiddling with wall fittings and electricity a little too out of their depth.

A WiFi light switch doesn't just mean it will only work when controlled with an app. It's still a light switch you can use, but that little green power light tells you when it's connected for online control.