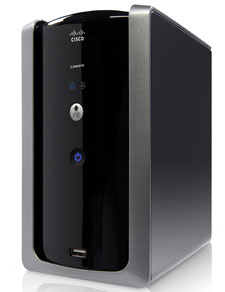 LinkSys has managed to take one of networking’s most dull acronyms – NAS (Network-attached Storage) – and turned it into a pretty desirable bit of consumer kit.

Our $649.95 NMH305 review model housed a single 500GB drive, with a spare bay for another. The more expensive $699.95 NMH405 comes with a media card reader and LCD screen so you can see what the NAS is doing. Installation of the Media Hub addresses one of the key problems that NAS systems have had in penetrating the consumer market – complexity.

LinkSys’ wizard-driven installation does take some time, but it’s logically laid out, and even those novices who run scared from CAT5 cable will have the Media Hub up and running with a minimum of fuss.

As part of the installation, users are prompted to set up backup software and decide which folders (if any) they’d like to share to the Media Hub. These can then be accessed from any computer on the network or DLNA-aware devices (such as Sony’s PlayStation 3 or Microsoft’s Xbox 360) to stream multimedia files. LinkSys extends this flexibility by making the Media Hub Internet-aware as well; you can access your personal Media Hub from any Internet connection via a password-protected portal.

In the absence of a screen, you’re stuck with a web interface to set up and view your files from a PC. The Media Hub’s interface features lots of big shiny buttons which are easy to navigate, although we do wish the help button took you to a help file rather than LinkSys’ website.

In our tests the Media Hub was detected on the network quickly, and this gave our photos, test video and music direct accessibility with a minimum of fuss. LinkSys’ claim that the Media Hub can handle up to three HD streams needs to be taken with a pinch of salt; we managed one just fine but found the Media Hub struggling to keep up after that.

One of the Media Hub’s big features is iTunes Media serving from your iTunes library. This is fine for music you’ve ripped yourself, but we had problems with any purchased iTunes Plus music playing back on an Xbox 360. The PS3 handled those files fine, but like the 360 baulked at protected iTunes music and any and all iTunes-sourced video files.

Like a lot of NAS units, the Media Hub can be a touch noisy in operation – similar in most cases to the average desktop PC. As such, it’s a good idea to have a spot away from your home AV gear to stash it, lest it interfere. Remote streaming is an Internet Explorer only option, due to limitations within Windows Media; this is bad news for Firefox, Chrome or Safari users – or people on Mac or Linux platforms generally.

The Media Hub is a 2-bay NAS, so two drives can be added – but it ships with only one. If that drive fails, your data goes with it, so we’d strongly suggest anyone considering the Media Hub look at picking up a spare 500GB drive to mirror the data on the first drive.

If you’re after a simple, single way to share all of your home documents and multimedia content, you can’t get much simpler than the Media Hub. As a first step device, it’s a good choice.