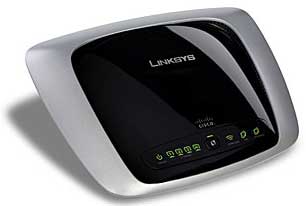 The Linksys Wireless-N ADSL2+ Gateway is the all-in-one solution for internet connectivity. The ADSL2+ Modem function gives you a blazing fast connection to the internet, far faster than a dial-up, and without tying up your phone line. The router function lets you share your high-speed internet connection with all the PCs in the house.

Share files, printers, hard drive space, and other resources by connecting your computers to the Gateway via the built-in 4-port 10/100 Ethernet Switch. Attach four wired PCs directly, or connect more hubs and switches to create as big a network as you need.

Or, use the built-in Access Point to connect wireless devices to your network without running cables through the building. The Access Point built into the Gateway uses the very latest wireless networking technology, Wireless-N (draft 802.11n). By overlaying the signals of multiple radios, Wireless-N’s “Multiple In, Multiple Out” (MIMO) technology multiplies the effective data rate. Unlike ordinary wireless networking technologies that are confused by signal reflections, MIMO actually uses these reflections to increase the range and reduce “dead spots” in the wireless coverage area maintaining the wireless connection much farther than standard Wireless-G.

With Wireless-N, the farther away you are, the more speed advantage you get. It works great with standard Wireless-G and -B equipment, but when both ends of the wireless link are Wireless-N, the Gateway can increase the throughput even more by using twice as much radio band, yielding speeds far faster than standard Wireless-G. But unlike other speed-enhanced technologies, Wireless-N can dynamically enable this double-speed mode for Wireless-N devices, while still connecting to other wireless devices at their respective fastest speeds. In congested areas, the “good neighbor” mode ensures that the router checks for other wireless devices in the area before gobbling up the radio band.

The Gateway protects your data and privacy with up to 256-bit industrial-strength encryption and 802.1x authentication and authorization. It also has a powerful SPI firewall to protect your computers against intruders and most known Internet attacks. Configuration is a snap with the web browser-based configuration utility.
With the Linksys Wireless-N ADSL2+ Gateway at the heart of your network, you’re connected to the future.