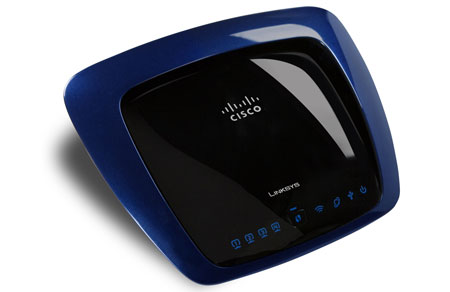 As progress in the field of wireless data transfer continues at a breakneck pace, new wireless devices are set to use a new band of the RF spectrum: 5GHz.

Until now, wireless devices like PC adaptors and the PlayStation 3, have used the 2.4GHz band. And while 2.4GHz has served us well, improvements in signal processing means 5GHz is the more stable and better-performing future.

But you don’t want your collection of 2.4GHz devices to get left behind, so LinkSys has a solution: a router than runs both bands simultaneously. A dual-band router, in the form of the WRT610N.

Naturally the router offers 802.11n Draft 2.0 functionality, with a theoretical maximum bandwidth of 600Mbps. The advantage over the 54Mbps 802.11g standard is obvious.

More importantly, the WRT610N offers true dual-band wireless. This means it can receive and transmit multiple signals at 2.4GHz and 5GHz simultaneously. Since the signals run at different frequencies, they don’t interfere with each other, and theoretically you can transfer more data across your network at once.

However, when it comes to shuffling big chunks of data around your network, 802.11n is the go. Especially since the WRT610N has a USB port to which you can attach any USB hard drive and turn it into Network Attached Storage, which can then be accessed from any PC or Mac on the network.

Other features exist to make the standard router functionality just that little bit more like an appliance for your home rather than a chunk of hardcore networking tech: the aerial is integrated, and there’s a Wireless Protected Setup button on the front which simplifies adding non-computer devices such as a media player.

Good as 802.11n wireless is, it can’t beat Gigabit Ethernet (which as the name suggests runs at 1000Mbps) so there are four gigabit ports and a gigabit WAN port – so if you’re a small business owner you can attach the WRT610N to your gigabit office network as a wireless access point.

Yes well, setting up routers isn’t the most pleasant of PC-based tasks, but the WRT610N includes a bunch of wizards and helpers called LELA, the LinkSys Easylink Adviser.

Generally it works okay, especially if you only need default settings. The fact you have to use a physical Ethernet cable for initial setup (instead of wireless) is annoying, but Linksys does include such a cable in the box.

There’s also tech support – accessed via the install disc – which can help you through the particulars of your modem and internet settings.

It’s hard to believe routers were once as big as entire PCs. This slim device does everything an old-school router used to do, plus about a hundred things more.

For the uber-geek in the family, there’s all sorts of configuration options for gaming and peer-to-peer file sharing, as well as functionality that identifies and prioritises entertainment-based data over wireless, such as streaming movies or audio.

And it’s wireless where the WRT610N really shines, especially at distances of 50 metres, where its data throughput is 65Mbps. Compare that to just 12Mbps for an 802.11g device.

Close-range testing yields 102Mbps for 5GHz and 52Mbps for 2.4GHz. These are decent scores, but there are faster routers out there for close-range work.

Remember though, the faster speeds only work if the device you’re connecting to the router supports the 5GHz band and 802.11n. LinkSys itself offers such an adaptor in the form of the WUSB600N-AS, a thumbstick-shaped USB unit. It costs $159.

What the WRT610N demonstrates is the future of wireless data transfer in the home: faster, more stable bandwidth, just in time for the HD revolution. And with a close-range speed of 102Mbps, that’s ample bandwith for Blu-ray.

In any case, of course the WRT610N is fast. Look: it has a spoiler!

Were giving away 3 of these routers in our Win 1 of 3 LinkSys wireless routers competition. Entries close 5pm on 19 March, 2009.