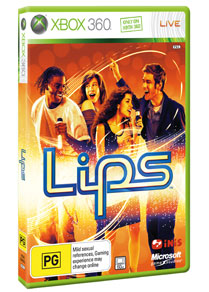 Lips from iNiS Corp is exclusive to the Xbox 360 and is, basically, that console’s version of the incredibly popular SingStar karaoke game on PlayStation. There are some significant differences, though, and they’re improvements as far as we’re concerned – you can download and play your own (DRM-free) songs, the game doesn’t rate your singing (so doesn’t fail you and is far more accessible for young families as a result) and the microphones are both sexier than the PlayStation SingStar efforts and wireless.

The 30 included songs are all over the place, from the classic ‘Call me’ from Blondie to ‘Umbrella’ from Rihanna, but since the game’s release there have been more than double that number of tracks released as ‘premium downloadable content’.

So if you’re keen on karaoke, Lips is now already cheaper than its $99.99 advertised price in some stores and well worth checking out.