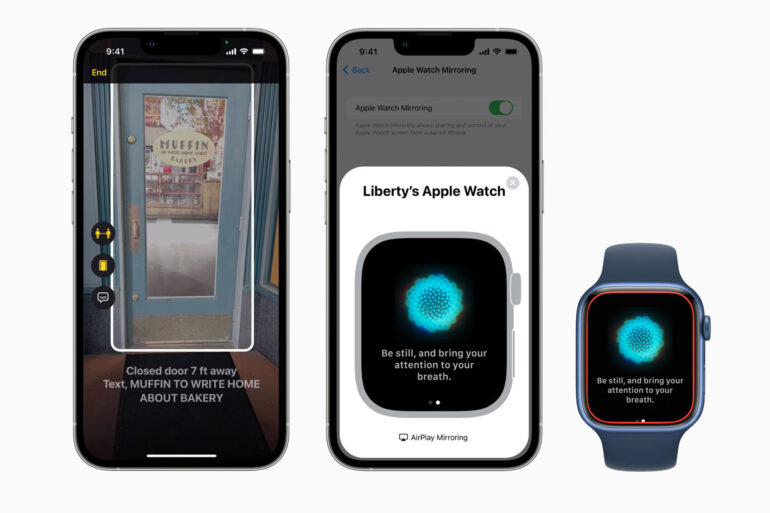 One of the major accessibility additions to look forward to is Live Captions, which will initially launch in a beta format for US and Canada-based users. Compatible with iPhone, iPad and Mac, Live Captions will automatically transcribe conversations held over the phone, on FaceTime, via social media apps, and in person. Font size can also be adjusted for comfortable reading, while Mac users can type responses to be read aloud in calls. Although Live Captions will only initially roll out across the US and Canada, here’s hoping other countries get the feature soon after so deaf and hard of hearing communities around the world can benefit from it.

Apple also discussed a feature to help people with blindness or low vision navigate doorways in unfamiliar locations. Called Door Detection, the feature helps users locate doors, how far away they are, and what type of door it is – including if it’s push or pull, has a doorknob or a handle, and so on.

Another handy aspect of Door Detection is the ability to read written details on doors such as numbers and if there is any accessibility entrance listed. When live, Door Detection will sit within the Magnifier app alongside similar accessibility features People Detection and Image Descriptions. This feature relies on LiDAR Scanners, so it will only work on devices with LiDAR technology, including the Pro iPhone 12 and 13 models, and the recent iPad Pro tablets.

Apple Watch users will be a major beneficiary of the upcoming accessibility additions thanks to Apple Watch Mirroring on Series 6 devices and above. Geared towards helping people with physical and motor disabilities, this feature will enable users to control Apple Watch with an iPhone, using either its larger display or voice commands.

Several additional accessibility features also on the way include more languages for VoiceOver, Apple’s screen reader tool, adjusting how long Siri waits before responding to requests, and Buddy Controller to combine two controllers into one input for gaming sessions. Check out the full details via the official announcement.