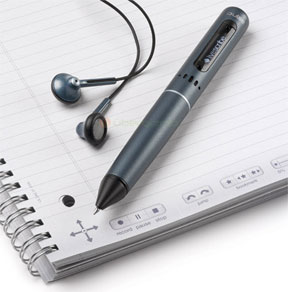 The LiveScribe Pulse Smart Pen is just that, a smart pen – the small device contains a computer, which, according to the Smartpen website, “captures handwriting and simultaneously records audio and synchronises it to the writing.”. It does this by working in tandem with a specially designed dot paper college-ruled notebook – a 100 page notebook is included in the package.

In practice, how does the pen work? Again, from the Smartpen website – “Users can simply tap on their notes to replay what was recorded from the exact moment they were writing, so they never miss a word they hear, write, or speak. The real magic, though, is that the pen simultaneously records every sound and connects the resulting audio to the captured image. All the captured material is timeline based, so turning back to any page in your notes and tapping the pen on a word will restart your audio at the precise moment your wrote that word.”

The 2GB Smart Pen gives about 200 hours of recorded talk time, the 1GB 100 hours, though this varies according to the setting of the audio quality. Once you’ve been ‘out and about’ with the Smartpen, you simply place the pen in the docking station, and upload your notes to the computer. The docking station will also recharge your Smartpen.

Additional applications will be made available for sale at smartpen.com.au.

What about Mac computer compatibility?

Mac users can use the pen and software via Apple’s Boot Camp version 2.1, using the Microsoft Windows XP operating system – it will not work with any of the popular Mac virtualisation programs, like Parallels and VMWare Fusion.

Smartpen announced in October 2008 that a Beta version of the Mac native Livescribe Desktop will be available by the end of 2008. There’s no mention of this actually happening yet, but Gizmodo reported in November that the Beta version was available.

The Livescribe Smart Pen available from Officeworks. The RRP for the 1GB model is $249, while the 2GB model sells for $329.