Logitech Craft, put a smile on your dial (review) 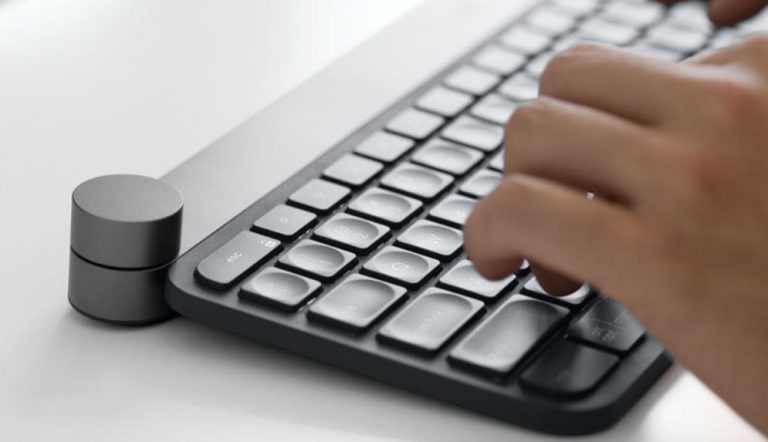 Logitech Craft is a keyboard that puts a smile on your dial – literally. Its dial helps creative workers do more particularly with Adobe software.

Logitech Craft (Australian website here) is a wireless keyboard that gives a good typing experience plus a versatile input dial that adapts to the creative app you are using. It helps to keep you focused and in your creative flow.

The backlighting is controlled by proximity sensors that detect your hands and adapt to room lighting conditions. You can also manually set it.

What is that dial?

The dial, Logitech call it a crown as in a watch, controls multiple functions depending on the app in use. In some respects it is similar to Microsofts Surface Dial – it is an aid for creatives.

For example, in Adobe Photoshop CC you can use it to edit photos and change brightness etc. In Adobe Illustrator CC change stroke weight or pen type. In Microsoft PowerPoint its font sizes and more.

Yes, developers need to integrate the Craft API into their code. But the acceptance of dial or crown input is growing. See a list of compatible apps at the end of this review.

You must install Logitech Options software to use the crown. It shows the different functions for each app and shows what apps later become compatible.

Typing – better than a MacBook keyboard

It is an island-style, chiclet keyboard – like you find on a MacBook or laptop. The keys are 15mm square and well spaced.

The throw is 1.5mm (good for a laptop-style keyboard), and actuation force is 50g (a little light but better than too heavy).

There is no key bounce giving it a solid feel. The top of each key is concave making every press accurate.

In typing tests, it gave 85% of results using a mechanical key switch Logitech G613 series with a 5mm throw and 60g actuation – perfect.

It comes with a Logitech Unifying 2.4GHz wireless USB dongle and also connects via Bluetooth LE.

It uses a 1,500mAh rechargeable lithium-ion battery charged via a USB-C port. It should give many months of office use between charges. Recharge time is about three hours.

Firmware updates are via USB-C, but you cannot use it as a cabled keyboard in this way.

Its alt, start, cmd and ctrl keys (Windows) are also mapped for Mac.  Craft can switch between three devices with the touch of a button.

You really can’t ask for something to be more compatible.

Logitech Craft is available from Logitech online and major retailers.

If you use apps such as the Adobe Creative range, strongly consider this keyboard for your workstation.

We covered the announcement here.

As this is a unique product with no competitors, we will not formally rate it.