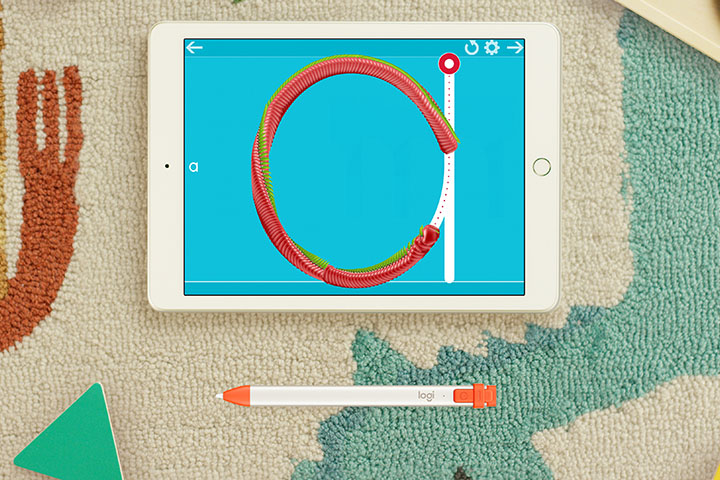 The Logitech Crayon and the iPad

First, as with the Apple Pencil, the Logitech Crayon works with some iPads but not with others. Basically, it works with all current models. Just to be clear, these are the models it works with:

In addition, the device must be running at least iOS 12.2. Of course, as new iPad models roll out, it ought to work with them.

The Logitech Crayon, like the Apple Pencil, is an active stylus. It has to be turned on to work.

Does the Logitech Crayon really not need to be paired?

How can I be sure? Well, that’s what all the information seemed to suggest, but to be certain I went into the Canberra Apple Store and asked if I could try out the Logitech Crayon – the one I brought with me that I had been using on my own iPad – on a couple of their iPads. Note, these iPads both already had Apple Pencils paired with them.

So, after a quick swipe to get to the home screen I tried to move an icon with the Logitech Crayon. Nothing happened. Oh, that’s right, I had to switch it on. I held down the power button for a second until the little light came on, then I touched an icon again and moved it. Then the same on the other iPad. I could just jump from iPad to iPad using the same Logitech Crayon.

So, how does it work? Good question. Wikipedia says that it uses “a proprietary undisclosed connection method that does not require pairing.” Magic maybe? The official line from Logitech is:

When turned on [the Logitech Crayon] establishes a direct tip-to-screen connection with the compatible iPad models. Logitech Crayon connects to iPad instantly with no complex device pairing or other delays so you can get to work right away. Just press the on button and start writing or drawing on iPad. Using Apple Pencil technology, the design is simple to use and extremely kid-friendly.

Clearly it uses the same mechanism by which the Apple Pencil’s tip location is detected, but without the individual device identification. Some kind of hack by Logitech? No, because it worked with Apple when developing the Crayon.

The Logitech Crayon works on some of the models that the old Pencil works on, but also works on the new iPad Pros. It doesn’t work on the 2nd Gen Pros.

That’s because it was originally developed for the education market and originally worked only on the iPad 6th Gen (aka iPad 2018). Since it was developed for that market, the Logitech is bright and robust (up to 1.2 metre drops). Its body is aluminium and it has rubbery orange ends. The tip has a protective cover, but it can still be damaged.

Having bent a few tips of my Surface Pens over the years, I try to be careful with them. There is no cap – all digital pens really ought to have them. Logitech suggests keeping it in in the sculpted holder in which the Crayon nestles in its original packaging. That is inelegant, but it works.

The last major difference goes against the Logitech Crayon: unlike the Apple Pencil it is not pressure sensitive. That removes one level of control which may be important for artists. It is, however, tilt sensitive. Some apps allow you to make the drawn lines wider by tipping the Crayon over.

I recently purchased an iPad 6th Generation. Although mostly a Windows and Android guy, I need an iPad because some of the stuff I review requires an iPad as a controller. My old (original) iPad Mini has stalled at iOS 9.x has becoming increasingly incompatible with many of these apps. It turns out that a 32GB iPad 6th Gen is the cheapest iPad presently available. It’s fairly snappy in operation, using the same A10 Fusion processor employed by the iPhone 7.

And most importantly for present purposes, it’s the first regular iPad to support Apple Pencil and Logitech Crayon.

The first thing to do with the Logitech Crayon is charge up its internal battery. The rubbery end cap pulls of easily to reveal a socket for a Lightning plug. No cable is provided, so you need to use your iPad’s charge cable. It’ll run up to 7.5 hours on a charge and has a indicators when charge gets down to 10% and 5%. It switches off after half an hour of non-use. A two-minute charge will give 30 minutes of operation.

Once it’s charged, you just hold down the power button for a second and a tiny LED briefly illuminates so that you know that it’s on.

And from then on you can use the Logitech Crayon on the iPad screen in place of your finger for moving things around or selecting them. And, of course, for drawing and writing.

Drawing and writing with what?

Well, you can use the Logitech Crayon to draw or write in any app where you can draw or write with the Apple Pencil, or indeed with your finger. A good starting point is the Notes app, preloaded onto your iPad with iOS.  This has the several drawing tools, including one that supports the tilt-widening feature. Notes does not provide handwriting to text conversion. Although I reckon it could. You see, when I handwrote a note, the app read the first few words and used them as that note’s title.

I tried a couple of drawing apps. Not all had drawing implements which supported tilt. Some had limited functionality unless you paid money. But in all cases, the Crayon drew cleanly and well. “Palm rejection” – resting your hand on the screen having no effect – also worked well.

Where the tilt worked, I felt I had to work on using it effectively. You really do need to tilt the pen over a fair way for a substantial widening of the line. Practice should make that easier.

Notetaking with the Logitech Crayon

Another notes app – GoodNotes 5 – is a decent Apple Notes replacement and has the advantage of having built-in handwriting to text conversion. It’s non-destructive, so you can keep your original scribblings handy until you’re double-checked the conversion.

I use Microsoft OneNote to keep myself organised in various things, so I tend to install it on everything. The iPad version also supports pen use, although not handwriting conversion. If you write something in the “Title” section of a new page a miniaturised version appears in the list of pages, remaining as a graphic.

But the Windows version of OneNote does convert handwriting to text. So next time I was at one of my Windows computers I could open up the relevant note and do the conversion. That was then reflected back in the iPad copy.

One last thing: digital pen and stylus makers usually say how it’s just like drawing with pen on paper. Well, no. You have to retrain yourself because the friction and feel of plastic on glass is very different to graphite or brush on paper. If you’re a good drawer already, you should be able to switch over fairly quickly. If you’re not … well, you now have the ideal opportunity for lots of practice.

So, Apple Pencil or Logitech Crayon? If you have an older iPad Pro, you have no choice. If you simply must have pressure sensitivity, you also have no choice. But for the rest of us, I’m inclined to think that the Logitech Crayon is the better choice. It’s a bit cheaper (a lot cheaper than the 2 Gen Pencil) and is ready for use on any supported iPad with no fiddling with settings.

And if you have two or more (supported) iPads, you can use it with any or all of them.

As mentioned, you can buy the Logitech Crayon at Apple stores and plenty of other places including directly from Logitech.

Features
Value for money
Performance
Ease of use
Design
No pairing!
Can use on multiple iPads
Robust design
Tilt for width allows better artistic expression
No pressure sensitivity
4.7