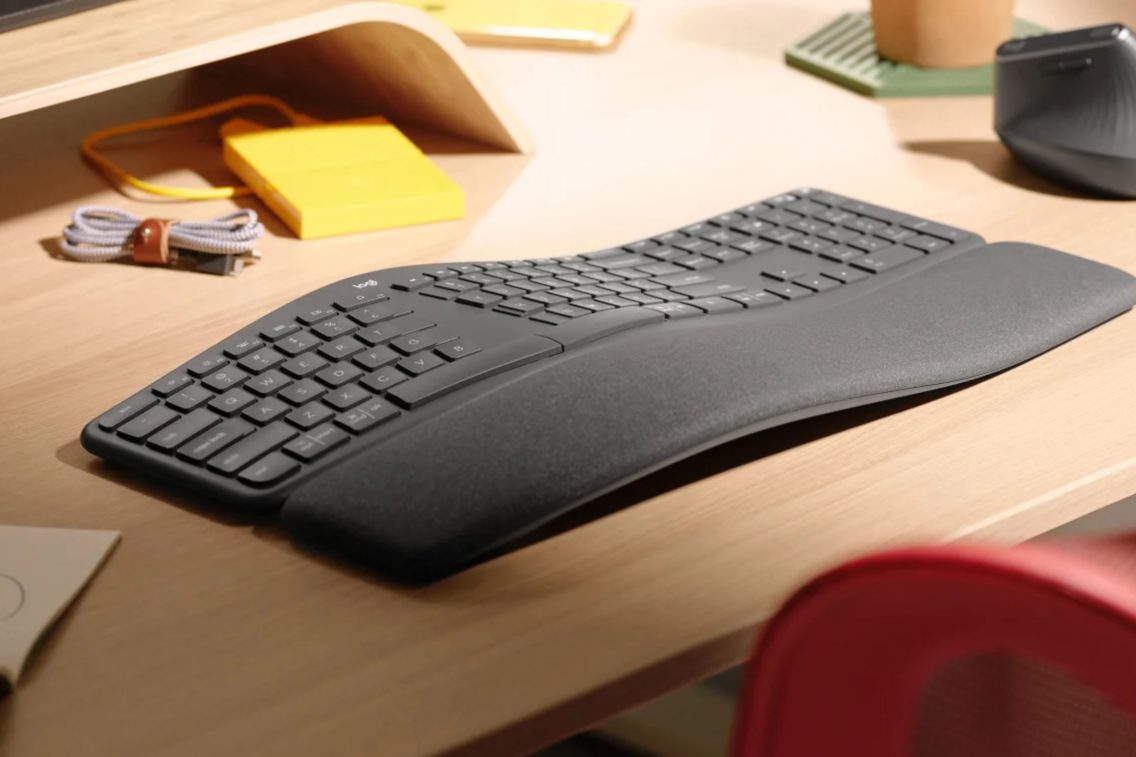 The Logitech Ergo K860 is one of those new-fangled ergonomic keyboards that are supposed to make typing more relaxed and natural. ‘Supposed’ is the word we want to question here.

OKm so my quick brown fix is sufferong seped ad accutacy issues… It is only a matter of relearning muscle memory – where the keys are. But to a trained touch typist messing with QUERTY is a hanging offence.

To be fair to Logitech, I did type this article on the kleybaordm and I have to say that by this – the thrd paragrph – there wa s some impreovement. Enough bad spelling – let’s get into the review.

Spoiler: If you are willing to embrace ergonomic keyboards, there is no better. If you want maximum speed and accuracy, it is not for you.

First, an assurance that this is an objective review free of 40+ years of being a straight keyboard user. In the distant past, I recall Microsoft had a go (and still make the corded LXM-00015 at $99.95). It had/has full throw keys, whereas the Logitech Ergo K860 has chiclet (laptop style) keys. But then Microsoft released the Surface Sculpt L5V-00001 with laptop keys too.

A quick search reveals dozens of brands and models, so it may be a niche market, but it is still in demand.

Most buy ergo because of health reasons – tendonitis in the wrist or elbows. The Logitech Ergo K860 makes you lift your wrists and arms and may help here.

It can also help with reducing repetitive strain injury (RSI). Why? It is supposed to be a more natural shape and typing experience.

But more often than not, benefits come simply by repositioning hands – from palms resting on a palm rest (or desk) to elevating the wrists and changing the wrist angle to 35°.

Ergo keyboards can assist with back, shoulder, and neck issues as you completely change how you sit to type.

The Logitech Ergo K860 has US Ergonomic and other ergonomic certifications

Chiclet keys present a very different typing experience from traditional keys. A chiclet key depresses up to 2mm versus a full-throw key up to 6mm. Actuation force is between 30-40 grams (light), whereas a full keyboard is 50g or more.

Chiclet is basically on or off. It lacks the tactile feedback of a full throw key that can be clicky, quiet or two-stage. Note that the lettering is a decal (transparent stick-on) and will wear – faster than injection moulded letters.

Then there is the ‘bend’. Most ergo keyboards are shaped like a wave (called tenting). This has 1/3rd on the left containing QWERT and the 2/3rds on the right with the YUIOP, a numeric keypad and directional/control keys.

The two banks of keys are slightly angled – about 35°, which appears pretty standard.

The Logitech wrist rest (covered in a nice textured and padded charcoal fabric) is height adjustable – a reverse tilt. That lifts your arms higher off the desk – it looks like you are ready to play an energetic Rachmaninoff Piano concerto.

This lift may be just what you need if you use a standing desk.

It is unfair to compare an ergo to a straight QWERTY keyboard (that has been around since they invented typewriters in 1868). BTW – there are many variations to QWERTY  – Dvorak, Colemak, Scholes, Workman, Alphabet and more. Although some use a hexagonal, single-handed, split or symmetric layout, most of these just swap keys around.

I am a 100 word per minute (WPM), 98% accuracy touch typist. Using a simple typing test, my speed was 48WPM and 80% accuracy. After a month or so, I suspect I could improve the speed, although not to the straight keyboard level. Accuracy wise you find yourself focusing on the keyboard and your finger placement, so it is not bad – typically, slower typing means more accuracy. But a touch typist does not look at the keyboard, and I think that confidence level will take way longer.

Remember that switching from a straight keyboard to an ergo will take weeks, not days, to get the muscle memory – at $229.95, this is not an impulse buy. So be sure you want one.

But I promised a straight, not bent review. That this kind of product exists is evidence enough of its need. That significant companies like Microsoft and Logitech (to mention but a few) make ergo models means there is demand.

The best advice is that if you have issues like tendonitis or RSI, this is worth trying.

Me – no. I prefer clunky mechanical keyboards and injection moulded lettering, but I write over one million words a year, so lesser chiclet and membrane keyboards wear too quickly.

It is a good product that meets all expected paradigms and comes from an excellent company that invests a lot in R&D. It will connect to three BT computers and adds value via Logitech Flow and Options. Note that from September our pass mark baseline is 6/10.

If we remove the ergo part from the equation, it is quite expensive for a chiclet keyboard.

Logitech Ergo K860
The Logitech Ergo K860 keyboard may help with tendonitis, RSI, poor posture and back issues.
Features
8
Value for money
7
Performance
7
Ease of use
6
Design
8
Positives
If you need an ergo keyboard, this is as good as it gets
Negatives
It takes time to develop the muscle memory to get reasonable speed and accuracy
Decal keytops will wear faster
Chiclet laptop keyboards have a different typing experience
7.2