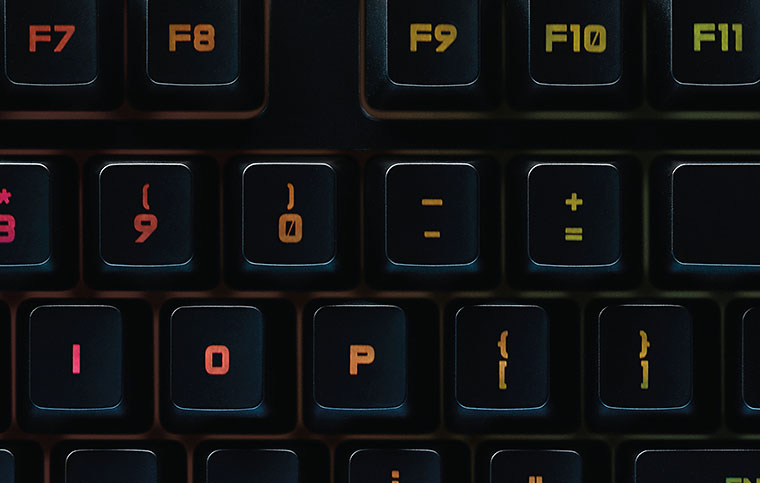 Okay, you can’t buy the Logitech G810 keyboard anymore. It seems that the Logitech G910 is the current version. It has more keys for specific gaming functions, but since I’ve pounded out perhaps half a million words on the Logitech G810 in the three-plus years since I reviewed it, I thought it would be worth following up with how the keyboard has coped with the ongoing assault.

What I thought then about the Logitech G810

I like keyboards with a certain feel. I spoke of that in that review:

the apex keyboard for me was the IBM PS/2 keyboard from the late 1980s and early 1990s. When I stopped working for places that gave me such fine equipment, I ended up purchasing a very expensive Lexmark keyboard by mail order from the US in the mid-1990s. Sadly, a spring in the space bar broke fairly quickly and that was it. I’ve been with membrane switches and worse ever since.

But the Logitech G810 (and the G910) use mechanical switches. Unlike those keyboards of old, they don’t activate at the bottom of the travel. The G810 didn’t specify the travel distance. In the review I estimated 5mm, but the G910 does specify it as 3mm, so I’m prepared to go along with that. Logitech specified for the G810 an activation point at 1.5mm into the travel, as it also does for the G910.

Old keyboards activated at the bottom of the travels. But, hey, a few milliseconds of time saving can be important in games. That half-way activation means a more responsive keyboard. It also meant me accidentally typing rows of semicolons when my little finger rested lightly on that key. But I got used to an and the accidents stopped.

But those milliseconds were unimportant to me. Instead, as a person thumping out thousands of words regularly, the Logitech G810 just felt right. The LEDs under each key were kind of nice, but I soon set the Logitech software, which controls the options of various Logitech devices, to white rather that the coloured options.

What I think now about the Logitech G810

In the end I concluded:

Who’d have thought it: the Logitech G810 Orion keyboard, developed principally for gamers, works beautifully for those who want to type, and type lots. It has everything where it’s needed. It isn’t cluttered with a lot of non-standard keys that just get in the way. And it’s a real pleasure for the fingers to use.

These past three and a quarter years the Logitech G810 Orion Spectrum keyboard has been plugged into my desktop computer – it is wired, not wireless – and consequently received at least ninety percent of my key-punches.

There are two things about the Logitech G810 keyboard that I appreciate about above all others. First, the keys still feel as solid and positive as they did those three years ago. They are always highly responsive.

Second – and I don’t think I was as fully aware of this then – I love the multimedia keys. There’s a roller for the volume control. And there are dedicated stop, play/pause and skip (both ways) keys.

I play a lot of music from my computer. I have a speaker system connected to it of such quality that the youthful me would have considered it unachievable. Sometimes I instead use astonishingly good headphones. Either way, all those dedicated controls are great. They work with Spotify and with TIDAL for streaming audio, and with Foobar2000 and JRiver for local and network audio playback.

Sadly, there has been a little wear and tear on the Logitech G810 Orion Spectrum keyboard. Back then, more than three years ago, I suggested:

There aren’t labels on the keys, as such, so they aren’t in any danger of rubbing off. As long as the LEDs last (which should be for many years), the key identification will remain clear.

Hmmm. We reviewers generally experience new or as-new products. So perhaps our perspectives are a little warped. It seems that this assessment was, on my part, at least somewhat wishful thinking.

The keys, the mechanical switches, still feel simply great. The media control keys still work perfectly. But the “labels on the keys”? Well, they can’t wear off because they aren’t there. The labels are shaped windows which allow the underlying LEDs to shine through.

And it turns out that if your fingers stamp out enough words, the wear-and-tear is evident. On my keyboard there’s a quite large area on the left “shift” key where the black coverage of the key has been worn away. Oh, I don’t know, maybe five to ten percent of the surface is now radiating a feeble glow. The LED light underlying the key is clearly focused on what is intended to be its main outlet – the etched “SHIFT” text.

That shift key is the most significant, but wear and tear has allowed shine-through on several other keys: the bottom-right on “D”, “F” and “P” and the right edges of “D”, “T” and “;” A largish section of the spacebar is also showing a bit of LED. There are more worn bits: bottom left on the “1” on the numeric keypad, plus on the delete key.

My guess that the LED’s “should be good for many years” is accurate … depending on what one means by “many”. I was thinking that “many” meant a minimum of five or eight years. Turns out they don’t last that long.

Currently I have two defective LEDs on the Logitech G810. While all but two of the keys are glowing a gentle white, as I prefer, F6 and the multimedia right-skip key are both glowing green, suggesting the failure of one of the LEDs in each of those keys – I’m assuming the use of red-green-blue LEDs.

But let me be clear. None of this has the slightest impact on the operation of this keyboard.  I still have a bunch of excellent keyboards I could swap in to replace the Logitech G810. But it’s only aesthetics that have suffered from my key pounding over these several years, not productivity. So, heck, I expect to keep on pounding the Logitech G810 until the keys wear away to something nearing incomprehensibility.