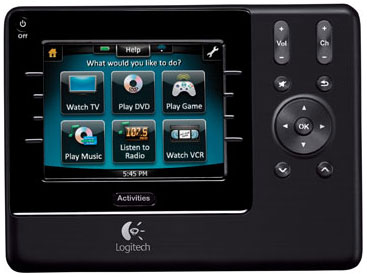 Scooping an innovation award at the recent CES show in Vegas, the successor to the 1100i programmable remote should be on shelves in Australia by the time you read this. Harmony’s VP in the States reckons the unit’s mission is “to simplify today’s complex home entertainment systems” and any regular reader of this magazine will certainly identify with that objective!

But does the new Logitech 1100i remote control achieve its lofty goal and, particularly with the advent of HDMI-CEC, is it worth you investing the dollars?

Things start well – the packaging is very good quality, conveying the feeling that you’ve bought something valuable. Out of the box, the most apparent change is the new livery, now presenting itself in the near-ubiquitous ‘piano’, or gloss black, finish rather than its predecessor’s more classic silver body which, depending on your personal home entertainment setup, could be a blessing or a curse.

The ‘quick setup’ guide folds open into a rather obtrusive size and, disappointingly, instruction no. 3 informs you you’re going to have to wait five hours for the battery to charge before you can use your new toy. Why Logitech can’t include a pre-charged battery with such an expensive item, goodness knows – if Duracell can do it with their rechargeable AAAs, we don’t think it’s too much to ask, is it?

So you’ve got plenty of time to go off and install the Harmony Remote software on your PC. To set the thing up, you need to go through a Q&A process with an online wizard. This has improved, as have the various compatibilities with the equipment you might wish to hook up to the remote. Previously, adding a Foxtel IQ box necessitated a lot of ‘tweaking’ to get the most-used buttons up onto the remote’s screen. This time around, the coloured buttons, the ‘back’ button and several others are there right away, as standard.

Logitech describe the Harmony 1100i as ‘plug and play’, but that truly is wishful thinking. The default settings, particularly the choice of buttons that get displayed on the lovely colour screen, will need a lot of adjustment after your first run-through. We encountered lots of resistance – no recognition of our PVR, a stubborn refusal to operate the Xbox 360 at all and, of course, it can’t cope with the Bluetooth-controlled PlayStation 3 (or the Wii) without buying a third-party peripheral. More like ‘plug and fiddle endlessly’.

The situation was saved by the Harmony Support Team – or more accurately, a very helpful guy there who called us at home and addressed some of the more frustrating issues. But the fact that Logitech has established a dedicated priority support line tells you something here.

The Harmony 1100i really can simplify your home entertainment system but to really get it working right, there’s a lot of messing about involved. Battery life is not great – about a day – but I guess that’s on par with any of the ‘smartphones’ with colour LCD touchscreens, so you just need to remember to cradle the sucker when you’re not using it. Compare it with other learning remotes, though, and it’s a bargain.

Overall
Features
Value for money
Performance
Ease of Use
Reader Rating0 Votes
Great build quality and bright screen; Very good at switching between inputs & components; Cheap entry option for its category
Requires patience and plenty of tweaking to set up properly; Often makes a poor choice for default buttons/ controls; Doesn’t operate while docked in charging cradle; Will not operate the Wii or PS3 game consoles
3.2