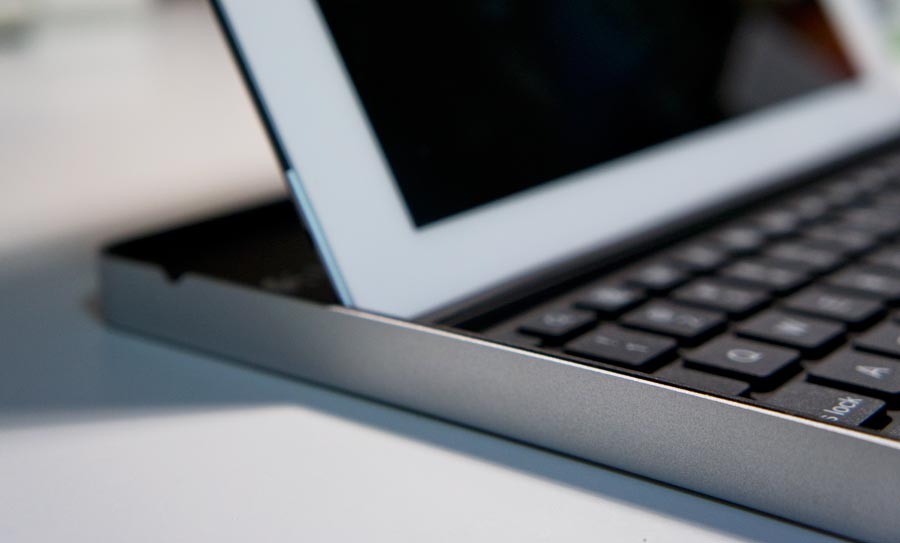 With the rise of writing apps on the iPad, many are abandoning the tablet’s onscreen keyboard for the more notebook-like typing experience offered by a physical QWERTY accessory. Logitech’s Keyboard Case is the company’s first effort in this area, but does it work as well as it looks?

The package comprises of the aluminium keyboard case itself, an instruction manual, and a small microUSB to full-size USB cable useful for charging the keyboard when needed.

A power toggle sits on the back of the unit, next to a connect button for syncing the keyboard to the iPad.

While most iPad cases try to find a way of enclosing the iPad in some protective material, the Logitech Keyboard Case for the iPad 2 is different.

A freestanding Bluetooth keyboard surround by an aluminium shell, it features a shallow trench just behind the keys into which the iPad is placed. The recessed area supports the iPad in landscape or portrait mode, with the tablet angled slightly backwards from the viewer.

Cosmetically, it’s a smart-looking match for the iPad, but there are some problems with the design.

First off, the iPad not held within the recess by any clamps or rubber grips; it just rests there. Being so positioned, it’s vulnerable to falls caused by knocks and bumps to the mounting surface, and to movement caused by the hammering of vigorous typists.

The recess also doesn’t support an iPad fitted with any kind of protective covering.  So, it you have a magnetic Smart Cover, you’ll need to pull it off. If you have some description of plastic or rubber skin, peel that off. If you’ve got… well, if there’s anything at all protecting your iPad, it needs to be removed because the recess is only thick enough for the iPad 2, and the iPad 2 alone.

Assuming you forgo protection for your iPad’s screen, Logitech suggests the tablet be stored safely inside the frame of the its Keyboard Case. It’s certainly up to the job, although accessing all the iPad’s goodness is not a quick or as convenient as a Smart Cover.

Positioning the tablet inside the chassis requires quite a determined push, too. The right amount of force will see it safely nestled, but too little and your tablet will just fall out. So make sure the iPad is fitted snugly, because the ground is hard and your iPad is, you know, not insured for hitting the ground.

Getting the iPad 2 out of the Keyboard Case is a two-handed operation: one to hold the metal Logitech case, the other to tug on the iPad. It’s a rough process, punctuated by scratching sounds.

Then there’s the typing experience.

The keys are springy and loud, and probably a touch too “springy” for our tastes. While the metal back is sturdy, the keyboard doesn’t impress as being well-built, the left side responding with more spring than the right side of the keyboard. The unevenness of the action leads to odd typing patterns.

The metal trim on the edges can get in the way of the typing, too – our palms constantly touched the sides, with the raised edges feeling like the top-side of a butter knife against our skin.  Not sharp enough to cut of course, but mightily distracting.

It’s a shame too, as we really like the layout of this Logitech, feeling as it does like a shrunken wireless Mac keyboard.

In use on a train and in a car, the Keyboard Case proved more stable than other wireless keyboards we’ve tested. Those that integrate a keyboard within folding leather stand tend to topple over with the slightest of movements, where as the Keyboard Case generally managed to keep everything upright. Under braking, the iPad fell forward into our lap, of course, but this is, at least, preferable to falling backwards onto the floor.

The message here is that, to achieve a stable connection between iPad and keyboard for use on the go, only a wired physical solution will satisfy. A notebook is probably the way to go here.

We were hopeful that the Logitech Keyboard Case would offer a step-up from the wireless-keyboard-folio-case option we’ve been using for nearly a year. It certainly looked the business, but doesn’t offer the stability or utility we have become used to.

Other users may be less fussy – the tactility of the keyboard is a peculiarly personal thing – and we can see it, in particular, finding a place as part of a permanent iPad desktop setup in the stylish home office.