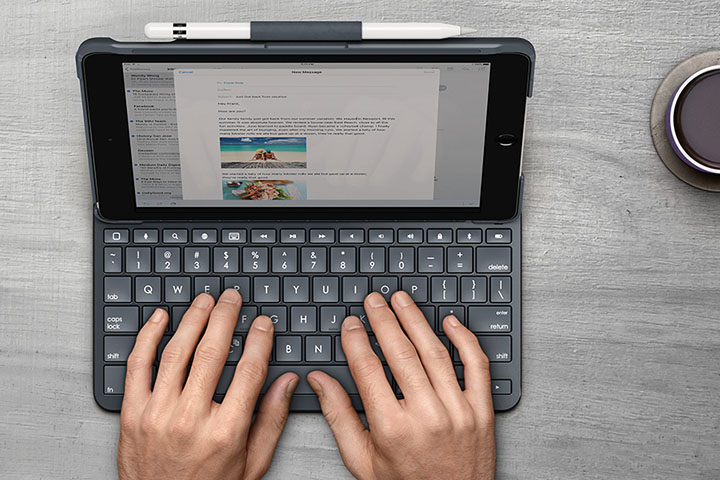 In my never-ending quest to find the perfect tool for the travelling writer, I asked Logitech if it might be able to help me out with something for an iPad. And thus we have the Logitech Slim Folio iPad case and keyboard.

One of my minor obsessions for over thirty years has been finding a totable computer optimised for my needs. Those needs were and are:

I started with a second-hand Toshiba dual floppy drive notebook. Heh, light weight is relative, and for the day it was kind of light. File sync? Easy, pop out the floppy and stick it in the desktop. Along the way I went through quite a few different notebooks, including one of the early HP OmniBook computers (with a massive 105MB PCMCIA hard drive and a surprisingly effective pop-out mouse!) For a while I settled on the original iPad, combined with an Apple Bluetooth keyboard. With suitable apps and Dropbox installed, it did a surprisingly good job.

Except for one thing: since the keyboard and iPad were separate devices, they were often hard to use when space was limited. Eventually I moved on to a Surface Pro 4 (and now Surface Pro 2017). It works fairly well, except when the touchpad goes berserk, which it does in certain physical environments, such as the airport Qantas lounge in which I’m typing this. (Why aren’t I writing this on the iPad? We’ll get to that.)

But it’s still quite large. So, when I recently upgraded to a more modern iPad (to use the latest iOS and now iPadOS), it was time to try reverting to an iPad for portable writing functions. And that meant a keyboard.

Well, the Logitech Slim Folio is a little more than just a keyboard because it’s effectively a case as well. A smart case, as it were. It connects to the iPad using Bluetooth and switches the iPad on and off automatically when you open and close it. (Unlike the Surface Pro type cover, which only switches it off, but not on.) You still need to unlock your iPad with a PIN or fingerprint or whatever.

The back part, which cradles the iPad, is made of a fairly rigid, strong-looking grey plastic. It has cut-outs in all the right places for the speakers, rear camera, microphone and Lightning port. The iPad is necessarily held in landscape mode with the home key to the right.

When you open it up, the iPad is at the top and the keyboard at the bottom. The bottom edge (that is, what would normally be the left edge) of the iPad, held by the case, is brought forward to lightly snap into place in a sculpted, magnetised holding area just above the keys. Opening up also switches on the keyboard.

It is powered by a couple of replaceable button cells. I know, I know, everyone likes everything to be rechargeable, but I like this arrangement. You see, it’s going to cost you virtually nothing anyway and one less thing to keep charged up is one less thing to worry about. Logitech puts the battery life at an exceptional four years, based on two hours typing per day. Unless you’re prepared to wait for four years of particularly assiduous testing, we’re all going to have to take that on trust.

No case fully protects its contents. You’re simply playing an odds-game: reducing the chance of damage in case of a drop. The Logitech Slim Folio certainly increases the odds of survival quite significantly. Both the protective back and keyboard side are quite sturdy and should resist puncture-type damage in all but the most extreme circumstances. They would offer less resistance to flex-type damage, but even there they should increase help out a fair bit.

So long as the case remains closed in cases of drops (from reasonable heights), it should be largely protective. Just fully encasing the corners reduces one the greatest drop vulnerabilities. And it should remain closed in most cases because it is magnetically held closed. Lightly, but it should be enough.

Putting the iPad in and pulling it out was not unduly difficult, even though the case tended to have a fairly tight grip. Over a couple of dozens of ins and outs it didn’t seem to loosen, so I’d expect a long life.

Pairing via Bluetooth is done in the usual way and worked smoothly. One final thing was required to set up the iPad properly: I added another unlock fingerprint. I normally use my right index finger, but with the iPad in the typing position, applying that finger to the sensor properly was awkward. But my right thumb was perfect for the job.

Connection was pretty much instantaneous whenever I opened up the Logitech Slim Folio and put the bottom of the iPad into place. I could start typing immediately. If I left the Folio open in the typing position and let the iPad go to sleep or put it in standby, then when I woke it up again the connection with the Folio wasn’t automatically established. I imagine it would consume power to just sit there continuously polling the Bluetooth spectrum looking for the iPad becoming available. Instead it wakes up again when you hit a key. That take a few seconds, so in those circumstances the first few letters of my typing wouldn’t appear.

You soon get into the habit of tapping a couple of keys to get the connection going. That was the only operational wrinkle.

Typing was as good as it can be on a keypad with a narrower-than-usual pitch of the keyboard. That part is unavoidable in a product like this which, of course, must be constrained to the dimensions of the iPad. If you simply must have a full 19mm pitch rather than 17mm, then take a separate Bluetooth keyboard with you. Good luck finding somewhere to prop up the iPad though.

So apart from things being a bit squishy for my chunky fingers, the feel of this keyboard was great. The 1.5mm depth of depression and robust construction made the unit feel satisfyingly solid. I usually use a Surface Pro keyboard for portable work, and it flexes and gives. This doesn’t. It just absorbed the blows from my fingers.

I got faster with it as time went on and I retrained my fingers out of their 19mm habit.

I return to the question of why I’m not writing this review on the iPad fitted with the Logitech Slim Folio. The main reason is that it’s easier to type on a different device  than the one which I’m examining. But the other reason is to do with the iPad, not Logitech. As I said, I’m in a Qantas lounge, and the reason for that is that I’ll soon be on a Qantas plane. And I’ve had a couple of unfortunate experiences with lost document updates on the iPad, stuff I’ve written while on a flight. That’s to do with the inscrutable ways that OneDrive (which is what I use for sync these days) and automatic saving in Word work with iOS’ obtuse filing system.

Which is a real pity, because the Logitech Slim Folio works really well on a plane. Its footprint is small enough so that it doesn’t overlap a tray table too severely, and it fits nicely on my lap when the tray table has to be up. And lately airlines seem to be tightening up on so-called “large devices”, retroactively assigning that designation to the Surface Pro. Sometimes you can even get away with using the iPad during take-off and landing.

The pen loop is useful, and I imagine it would be even more useful if you have an Apple Pencil. I have the Logitech Crayon, which seems to be a little bit fatter than the Apple Pencil. It fits but it takes a bit of effort to push it in and pull it out.

I think that as soon as I can be confident that Word and OneDrive and iOS won’t lose my work, I’ll be using the iPad with the Logitech Slim Folio as my main implement for writing during my travels. It really does the job well.