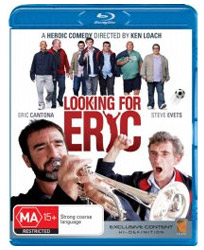 Described as an ‘heroic comedy’ by distributors Icon, Looking for Eric achieves that heroism not in the way you might expect from a diet of Rocky, Iron Man or even Inglorious Basterds, but in the most understated way possible, through perseverance and accumulative effort.

If you’re OK with that but are still expecting a comedy, you’ll likely be surprised again. A kind of ‘guardian angel’ tale, the film’s two main characters are both called Eric – one fictionally, in the guise of a disenchanted and depressed postman, Eric Bishop, and one in reality, Eric Cantona, the refreshingly offbeat and individualistic Eric Cantona.

That latter, who always fancied himself as a bit of a philosopher even while playing soccer in England for Man U, gets to live out his missed calling, coaching our miserable postie in the ways of life, love and so forth. ‘King Eric’, as Cantona is known by his starry-eyed fans, is an interesting presence, but the real allure of this film is the gradual development of the ‘other’ Eric, despite a pretty daft final act, witnessed in that down-to-earth, ‘feels almost like a documentary’ style of Director Ken Loach.

The DVD version only really has an audio commentary by Loach, although the Blu-ray offering is much better, including an entirely standalone short film ‘Another City’, following Bath football club, a long ‘fan documentary’ and extended Q&A segment, a sprinkling of deleted scenes (why, why?!), a music video and another shorter, short film.