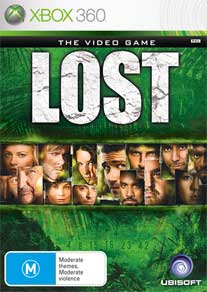 If there’s a game that needs no introduction, it’d probably be this, because if you’re not a fan of the TV programme of the same name, there’s little reason to be reading this and won’t care what it’s about. If you are, then you’re probably already rushing down to grab the game version from your local games store and no opinion about the game’s quality will sway your decision. In case we’re wrong about that, however, let’s press on.

Rather than simply mimic what’s happening in its TV counterpart, the game ‘Lost: Via Domus’ treads a parallel path across the beach and through the jungle by taking the familiar surroundings and certain key characters and presenting a complete unknown (you) as the main focus of the action. Actually, we say ‘action’ but mean ‘adventure’, and it’s a relatively slow, methodical and brief adventure at that. Reminiscent of the movie ‘Beowulf’, in that the character modelling and animations is still lingering just this side of creepy, despite capturing some decent likenesses of several pivotal ‘Lost’ characters, the dialogue is equally stiff and lifeless. For show fans, this has to be a real letdown, although some fine storytelling and decent game graphics will make up for that.

Memory-jogging flashbacks that help the story potter along are quite entertaining and innovative, fitting nicely with the TV-episode style. There are even the very much in-vogue ‘recap’ summaries at the end of significant stages in the game to herald the next one – a nod to the current fashion for TV series to continually regurgitate events to fill time. Still, it all fits again with the fact that this is a game version of a popular TV show.

If any games developer was going to buck the perennially disappointing trend and actually produce a decent videogame out of a TV or movie, you’d think Ubisoft would be the outfit to do it. The fact is, though, that only the most fanatical devotees of the television show are going to find anything beyond a lacklustre, ‘by-the-numbers’ adventure here, given its patchy game design and lifeless digital versions of what anyone playing this will probably regard as much-loved, and fascinating, personalities.

This game was reviewed on an Xbox 360. The game is also available on PlayStation 3 and PC.