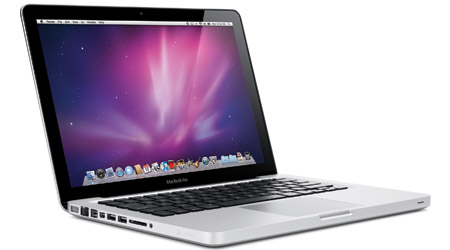 The 13 inch MacBook Pro has been similar in spec to the less-expensive white polycarbonate MacBook, but Apple’s recent upgrade has delivered a more pronounced – and long overdue – point of difference.

While the inexpensive white MacBook and silver MacBook Pro have had a lot in common, Apple’s recent upgrades mean the el-cheapo Mac now takes a backseat, its Intel Core 2 Duo processor now outperformed by its faster Core i5 and i7 cousins.

The new MacBook Pros integrate variants of Intel’s new processors, built from the company’s recently launched Sandy Bridge technology. Our review unit had an Intel Core i7 2.7GHz processor, but the base 13 inch MacBook Pro comes with a 2.3 GHz Intel Core i5, which should provide excellent performance for editing photos and videos, playing the occasional game, and doing your regular office work.

Both models come with a minimum of 4GB memory, Intel’s high definition graphics built into the CPU, at least 320GB of hard drive store, Bluetooth 2.1, WiFi ‘n’ networking, a backlit keyboard and a built-in battery which Apple claims is good for up to 7 hours of use.

Design-wise, not much has changed with the Pro. It still weighs roughly two kilograms and bears Apple’s signature ‘unibody’ design, where the chassis is constucted from a single piece of aluminium. This makes it more durable than competing laptops, which are typically fashioned from multiple panels of plastic or magnesium alloy. The chiclet keyboard remains, complete with the aluminium casing separating each key, as does the glass multitouch trackpad.

The DVD burner remains at the front right of the machine, while the left side edge houses the same selection of ports: Firewire 800, Gigabit Ethernet, two USB 2.0 ports, audio line in/out, and Apple’s MagSafe power port.

New to this array of connections, however, is a card slot capable of supporting the new SDXC memory card format, and the high-speed Thunderbolt connection developed by Intel and Apple. This new connection uses the same Mini Display port Apple has relied on for sending graphics and video to external monitors, but also works with data transmission. Apple hopes companies will start using Thunderbolt as a new port technology on hard drives, sound cards, and video devices, similar to Firewire and USB.

Apple’s webcam has undergone a change, too. The older iSight camera is replaced by a FaceTime HD camera, which is capable of 720p video conferencing over the Facetime network. Given the amount of iPhone 4 users looking to chat with this system, it’s a welcome improvement.

Apple’s upgrades to the MacBook Pro are nothing short of excellent.

Makers of GeekBench (Primate Labs) tested the machine and found it to be slightly faster than last year’s 15 inch MacBook Pro, powered by the then dual-core Intel i7 processor.

In our tests, the numbers were similar: with a score of 6877, our 13 inch MacBook Pro powered by the new Intel Core i7 is faster than what you could find in last year’s version of the more expensive 15 inch model using a similar processor (which scored 5910).

If benchmarks don’t means much to you, then check out these numbers: iMovie loaded in only two seconds, GarageBand in seven seconds, and Final Cut Pro in a meagre 16.5 seconds. That’s well under 30 seconds for each, and demonstrates just how much heavy lifiting these new processors are capable of. Further more, a one-minute video export from iMovie took ever so slightly more than a minute (1:18) to resize and export a 720p HD file into a slightly smaller resolution.

As mentioned previously, the new graphics processing power is built into the chip too, meaning the 13 inch computer no longer relies on Nvidia’s discrete technology. On the 15 and 17 inch MacBook Pro models, you’ll find better graphics from AMD, but don’t dismiss the Intel HD chipset built into Sandy Bridge – it’s fast enough and more than capable.

While we don’t recommend it for performance-intensive tasks such as video games, casual games such as Telltale’s “Back To The Future” were handled easily. Even Blizzard’s “StarCraft 2” worked well on the MacBook Pro with graphics settings dropped to low (average 60fps) or medium (averaging 30fps).

It’s inconvenient that the MacBook Pro does not have a pre-installed copy of Flash (which will prevent you from browsing YouTube out of the box), but that will take only a few minutes to do yourself.

More disappointing is the absence of a pro-quality screen, with the 13 inch MacBook Pro retaining the same display used in the white polycarbonate MacBook. If you’re buying this for portable graphic art and photography work, you may be better served by a higher spec’d model. The screen is also offered only in a glossy finish, whereas the bigger MacBook Pros provide a choice between the standard glossy and an optional anti-glare display.

As for the quoted seven hour battery life, you’ll achieve that only that if you’re using WiFi to browse the web and work on office projects, such as writing documents and spreadsheets or checking emails. Our test activities –  surfing the web, watching online video, playing a casual game and working inside GarageBand – exhausted the battery in roughly five hours.

Intel’s new processors deliver a welcome boost in speed and provide a solid and compelling point of difference between the $1199 white MacBook and the $1399 MacBook Pro. The extra dollars no longer buy only a backlit keyboard and aluminium body, but some very fast internals and a new webcam.

The addition of Thunderbolt could prove to be useful and, because it’s built into the design spec of Apple’s Mini Display port, doesn’t take up the place of anything else that’s necessary. Whether it becomes the hit Apple and Intel hope it is – especially since it competes with USB 3.0 – remains to be seen.

The new technology offering in the 13 inch MacBook Pro, however, makes it one of the better laptops available today and brings Apple’s lineup well into 2011.