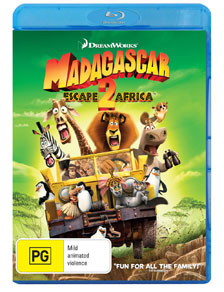 A truly all-star cast returns to voice this second outing for the navigationally-challenged zoo crew and they should be thankful that they did. Better than the original film in every respect, Madagascar 2: Escape to Africa starts strongly, taking up where the last film left off with a bid to get back to the safety of the Manhattan zoo they call home, but crash-landing the animals in the heart of Africa instead.

Their subsequent adventure is far less copycat than before, the humour is more subtle, the characterisations more original and downright funny – the hippo Moto Moto is a real treat – and the treatment is less anthropomorphic overall, mitigating the usual inferiority of Dreamworks’ efforts when compared to Pixar.

The Blu-ray version has been graced with a few extras not seen on the DVD: nothing that looks very innovative, but there’s are clips dubbed ‘Filmmakers’ CommentarY’, ‘The Animators’ Corner’, a ‘Trivia Track’ and a bunch of high-definition versions of specific film clips.