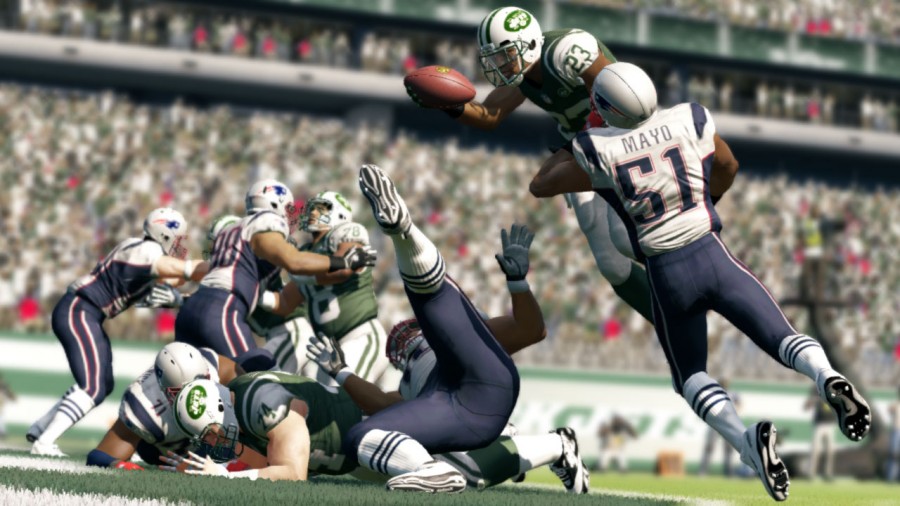 Despite these new cosmetic makeover elements, the on-field play in Madden 13 can be enormously frustrating. The commentary is appalling, stock sequences and behaviour are used for all teams, and the AI is dumbfounding.

We haven’t seen player telemetry data from EA Sports on this (our request for it was politely declined) but are willing to bet that a good proportion of gamers play Madden casually with their mates, just looking to have a bit of fun. This is the way to play, because any sports game competition against another human ‘evens the field’ a bit – you’re both liable to make great plays and stupid plays, have successes, and even make horrible mistakes.

Not so when you’re playing against the computer: sure, you’ll see the computer have its fair share of incompletions, but if you’re leading a game by too great a margin, the super computer takes over and starts marching down the field with one preternaturally astonishing play after another.

Put simply, the AI cheats in single player. Runs will go for 40 yards a piece, long passes are plucked out of the air by receivers who, milliseconds previously, were about five meters off the ball with their backs to the play, and offensive lines totally dominate your defence to allow their runners through.

Suddenly, the computer competition has more agility and spatial awareness than the Bolshoi Ballet, third down completions rocket into the 90th percentile, and the opposition becomes unstoppable. This happens very frequently indeed.

The bizarre thing is that you can change all this, almost beyond recognition, using the game’s ‘sliders’. Not a readily apparent feature to anyone besides hardened Madden fans, inside the ‘Settings’ section is an innocuous-looking group of parameters that you can manually adjust. These include the player’s performance, that of the AI, and in-game penalties. Adjust the slider for each of the many different aspects here and you can totally transform the way the game plays.

There’s an entire culture amongst seasoned players online of determining and sharing ‘slider sets’ that make the game play more realistically. And if you never make any other adjustment but this one, do it just for your own sanity – set the game speed to ‘slow’.

Frustrating AI (Artificial Intelligence) aside, the game looks and feels exactly like it did last time around. There are some subtle differences – there is an alarming overabundance of interceptions (in our first game, the opposition intercepted every time we threw a long pass for five in a row) and just plain dismal run blocking that makes you want to throw your controller through your TV, but on the whole the gaming experience is similar, with the added entertainment value of the Infinity Engine’s antics.

Commentary is still horrible. We made the point in our review of the last Madden game that the commentary was inaccurate, repetitive and so forth, but in Madden 13, despite a changing of the guard in terms of the commentary team (kicking out Gus Johnson and Chris Collinsworth in favour of Phil Simms and Jim Nance), it’s still hopelessly inaccurate.

Once you’ve played your first game, there’s a good chance you’ll be treated to comments you’ve heard before, in every single subsequent game, regardless of what’s actually happening on the field. It never feels like they’re actually watching your game. They’ll talk about a huge punt return, when you’ve actually been stopped in your tracks before taking more than three steps. You’ll hear your RB chastised despite having just made a 16 yard run, and you’ll lose count of the number of times the pair babble on about the new facemask rule.

Every year we hope for a better, more authentic NFL experience from Madden. And every year, we get a cosmetic update, gross levels of pandering to online play, and a whole slew of time-consuming, people-intensive, expensive alterations that no-one actually asked for.

Most of these involve cramming in more ‘authenticity’ via marketing deals. Hello Verizon. But these ‘improvements’ rarely make the NFL game play better on the field.

The sponsors are no doubt delighted, but when you still seem to be able to run any play with any team, with the same level of success, for example, making as basic a decision as choosing your team redundant, you’re going to upset a lot of fans who pay for the game.

But we hope for these things because some of us think NFL is one of the greatest sports, and that EA Sports is one of the most capable developers.

The biggest problem is that they have no competition. And no-one at EA seems to have heard the expression “if it ain’t broke, don’t fix it”. Or if they have, what they think is broke and what we think is broke, are two very different things.

We can appreciate that. We just can’t seem to enjoy playing Madden NFL videogames any more. Maybe monopolies aren’t so great after all.