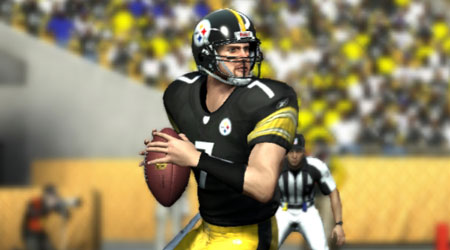 Yes, we know it’s American Football and so not one of the most popular sports in this country but, this year at least, give it a chance and read further. Because this year, Madden NFL 2011 is downright brilliant. Perennially accused of lazily knocking out a minor update each year and grabbing our money each time, EA has changed their game this time around and, with it, dramatically changed the game for us too.
Madden NFL 2011 is the first version in years where the developers have clearly taken a long, hard look at how the majority of players actually play Madden games rather than over complicate the strategy side or stuff it full of useless, expensive ‘real-life’ footage; the result being, ironically, that in one fell swoop they’ve simplified choices for the gamer and made it more authentic at the same time. In previous iterations of this game, players have had to choose their defensive formation, adjust linebackers and safeties, choose offensive formations, call hot routes or audibles, designate double coverage and so forth all on their own. In real life, however, there’s a defensive coordinator and his team calling defensive plays, and the same for offense, special teams and kicking. In the real game, the quarterback is, generally speaking, told what play to run, and he simply executes on his orders, unless he’s trusted with making alterations in the event of something unexpected in the defense. And now, this is what happens in Madden NFL 2011.

If you select ‘Gameflow’ in ‘options’, virtual coaches make all the strategic decisions for you, and you get to make it work on the field. To say that this transforms how you play Madden is an understatement: now, you don’t have to be an expert on the reasoning behind each play, but can still exercise skill running them. It’s a ‘Eureka!’ moment, informative, easier and immensely gratifying at the same time, being allowed to enjoy just playing NFL. And if you think the coaches have got it wrong, which they sometimes do of course, opening the full playbook to select your own play is a single button press away. Calling audibles and ‘Hot Routes’ is now far more intuitive and accessible and, once in play, blocking is more effective, allowing you the time to make the play. Running the ball is far more balanced now, too, with the real possibility of making great gains by actually following your blockers, and the same goes for plays through the air, if you allow the scheme to develop as planned and hit your receiver at the right moment. Injuries seem far too frequent, but that’s a minor issue.
Which isn’t to say that Madden NFL 2011 is without its foibles. While the graphics are superlatively done, crowds are still disappointingly uniform-looking and lethargic. The game still makes you choose ‘Exit Game’, then ‘Quit, then asks if you’re sure you want to quit the game, to return to the play schedule – you’re not quitting, you’re continuing, but it makes you feel like you’re going to quit out and lose your progress, which seems poorly thought-out. And, for some odd reason, the excellent ‘CoachSpeak’ only works for one of the two players in a local multiplayer match, leaving Player 2 completely in the dark about what play is coming next, unless they trigger the ‘Playart’ (which gives away the play to the opposition).
Regardless, with a robust online offering including a fun but confusing 3-on-3 mode, similar (but good) Franchise mode from before and the excellent ‘Gameflow’, Madden NFL 2011 is the best version of the game for years. It’ll doubtless upset some of the most hardcore NFL fans, control freaks that they are, but the reality for the vast majority of gamers who buy this game- particularly in Australia – is that EA has made Madden more accessible, more authentic and more fun, plain and simple, and we’ll be playing it until Madden NFL 2012 rolls around.