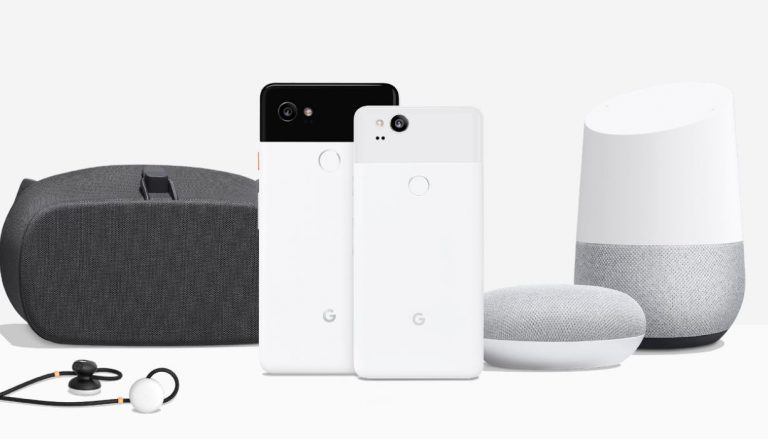 Have you noticed that Google (or rather its parent company Alphabet) has started designing and manufacturing ‘Made by Google’ branded hardware?

All it did before this was simply sign off on Nexus designs made by HTC and LG.

Some of the Google hardware is quite good, and some is, well, adequate.

Google seems content to run things up the flagpole and see if they fly. It is almost as if it does not care if a product sells as long as it has market presence. Analysists comment that Google can well afford to experiment and walk away from any hardware disasters it may have.

Made by Google has great ideas, but sometimes the execution falters

For example, Pixel 2/XL may have a great camera, but the phone hardware suffers in comparison to its competitors. Maybe version 3 will be the phone it really wanted to build.

The real reason it is investing in hardware is simple. It cannot afford for other companies like Amazon (Alexa) or Samsung (Bixby) to succeed in areas that it considers its turf – like Google Assistant.

It also must do everything it can to stop the spread of Apple’s very profitable iOS ecosystem. A limited version of Google Assistant is available for iOS, but it is no serious threat to Siri.

Analysists are saying Phil is the answer to a longer-term vision that brings together all their scattered hardware efforts into something big.

Then there is the recent US$1.1 billion acquisition of HTC’s R&D division (that designed Pixel/2/XL) comprising transfer of over 2,000 engineers — that’s around 20% of HTC’s engineering team. Google will also receive a non-exclusive license for HTC’s intellectual property. It also gives Google a new engineering base in Taipei, Taiwan, where HTC is located.

Senior Vice President of Hardware, Rick Osterloh, said in the blog post, “As our hardware business enters its third year, we remain committed to building and investing for the long run. Today, we start digging in with our new teammates, guided by the mission to create radically helpful experiences for people around the world, by combining the best of Google’s AI, software and hardware.”

It has also announced the opening of an AI lab in Beijing, a manufacturing base in Shenzhen (the Silicon Valley of China), a patent licencing deal with Tencent and more Chinese investment.

Made by Google is a way to defend its turf

Most of what it does relates to revenue from search via desktop, mobile and now voice. In 2016 the bulk of its US$89.5 billion revenue came from its proprietary advertising service, Google AdWords and AdSense.

GadgetGuy’s take. Made by Google is a good thing for us all

This ‘Made by Google’ move is about both Google’s survival and in many ways a subtle threat that a bloody war will be waged with any interlopers on its turf.

Survival in that Google relies on thousands of third parties to use its software products as intended.

Android has now become the main mobile OS with about 90% of all handsets using it. iOS is not really a fierce competitor – it has about 10% and survives because Apple was first to market with the iPhone and do such a good job marketing its iOS ecosystem to those who can afford it.

No, the threat comes from the world’s largest smartphone maker Samsung that could use its Tizen OS and Bixby to cripple Android and Google Assistant’s dominance. That is unlikely to happen (app issues alone), and these, and other smartphone companies have learned to play well together.

Then there is the ambitious move to get Chrome into the ‘desktop’ world. Chrome will gain market share (it has less than 1% now), but Windows has 90% and macOS 10%. Here Cortana and Siri rule the voice assistant world and Google wants a piece of that pie too.

In fact, there is a Google app on Windows Store that allows basic Google Assistant access. But its somewhat limited as Microsoft has Cortana, Edge and Bing and gets significant advertising revenue from that too.

Thn there is a real threat that Amazon Alexa could grab serious market share.

I’m not a fan of Google’s business model – collection of personal data to build personal advertising profiles. But I suppose in this always connected world it is inevitable, and at least you can enable privacy features fairly easily.