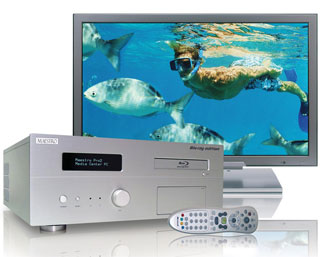 Altech Computers, which is fast gaining a reputation as an innovator in the world of Media Center PCs, is the first off the mark to offer a Blu-ray drive in a Media Centre as a part of its powerhouse Maestro Pro 2 system.

Unlike some of Altech?s small form factor Media Center PCs, the Maestro Pro 2 comes in a monumental chassis, although its brushed-metal finish is not displeasing to the eye. However, it?s what?s embedded in the front fascia of the Maestro Pro 2 that will really draw attention. A Samsung 2x BD-RE (Blu-ray rewritiable) drive sits ready to accept either 25GB or 50GB Blu-ray discs as well as recordable and rewritable media.

Now having a Blu-ray player is all good and well, but you might have some difficulty finding media to use in it. As of mid-2006, there are still no movies released on Blu-ray in Australia, and no recordable media either. Sony does plan to have Blu-ray movies released out here sometime in the third-quarter of 2006, and media companies, such as Verbatim, intend to release recordable media shortly. So until media is available for the Blu-ray drive, it?s more symbolic than useful.

That?s not to say there isn?t a lot else to like in the Maestro Pro 2. It comes well equipped for its job as your living room entertainment hub. Inside the case are dual high definition digital TV tuners, which are ideal for receiving and recording the ever-increasing high definition content being broadcast around Australia. To handle the massive storage requirements of high definition TV is no less than a half terabyte of storage care of dual Samsung 250GB hard drives.

Altech also bundles in an electronic program guide care of IceTV, although you?ll have to pay to continue your subscription after 30 days. It?s definitely recommended that you do, though.

All these elements find synergy through Microsoft?s Media Center operating system, which gives you full PVR (personal video recorder) functionality as well as access to your stored videos, music and pictures as well as online content, all from the comfort of your couch through the intuitive remote control-driven interface.

There?s also no lack of horsepower under the hood. The Maestro Pro 2 conforms to Intel?s Viiv platform standard, which brings together an Intel processor, chipset and network chip that are all optimised for home entertainment. In the case of the Maestro Pro 2, it packs a dual-core Pentium D 930, running at 3GHz, along with 2GB of DDR2 RAM. This is more than enough to handle any task you?re likely to throw at it in your living room, it?s even enough to handle high-end Windows applications should you choose to attach a keyboard, mouse and monitor.

While it might be a bit early to throw all your eggs into either of the high definition DVD baskets, the option to bank on Blu-ray is now out there care of the Maestro Pro 2 Blu-ray Edition. Even ignoring the Blu-ray drive, it?s an impressive machine, with everything you could hope for in a Media Centre PC. The only drawback is you pay to have the latest and greatest. The Maestro Pro 2 Blu-ray Edition is not cheap at just shy of $4000, but it does represent the pinnacle of Media Centre PCs today.