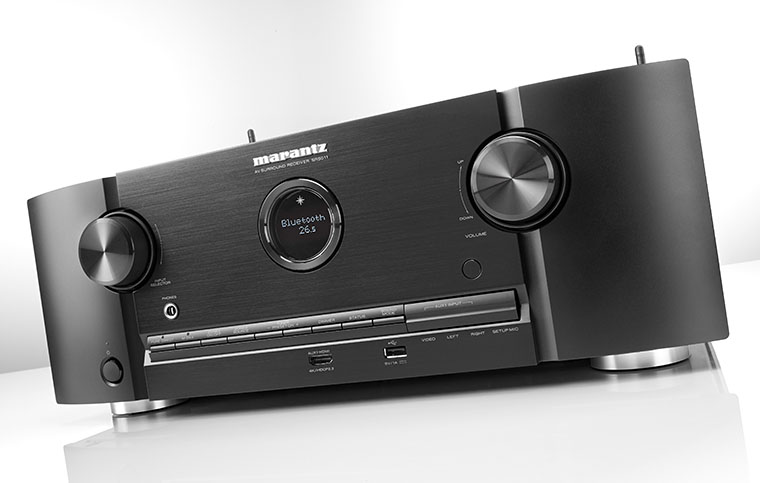 Priced at $1590, the receiver features seven amplifier channels and decoding for all the latest high fidelity and home theatre audio standards. Those include Dolby Atmos and DTS:X, the new codecs for Blu-ray and UltraHD Blu-ray that feature sound “objects” which can be steered around the room. They also support overhead speakers for a fully immersive experience.

The amplifiers are rated at 180 watts each, according to press release, which appear to comply with the press release custom of claiming the highest possible rating at elevated distortion levels. The more useful power rating is a healthy 100 watts for each channel into normal loudspeaker loads at all audible frequencies with two channels driven.

Video support includes the latest HDMI inputs (eight of them) and outputs (two), fitted with the HDCP 2.2 content protection required to work with UltraHD Blu-ray. They support the highest video standards (4K at 60 hertz with full colour resolution). And there’s a full range of legacy analogue inputs for video and audio. Including, surprisingly, 7.1 channel inputs. Plus 7.1 channel outputs so there’s the opportunity to upgrade the power amplification in the future if needed.

This is a full network receiver, with both an Ethernet port and built in WiFi (2.4GHz and 5GHz available). A control app for iOS and Android can provide convenient management of the unit. More importantly, the SR5011 can play all your network audio, routed to it via the app, or any DLNA (Digital Living Network Alliance) app. The audio formats supported include the high resolution standards up to 96kHz or 192kHz in FLAC, WAV and Apple Lossless. Plus the current audiophile favourite: Direct Stream Digital in both standard and double speed form.

The receiver supports Spotify Connect for those with a Spotify Premium subscription, and Internet radio which gives access to tens of thousands of radio stations all around the world.

Those who prefer Apple devices (which typically don’t support DLNA) are well served with Apple Airplay support. The receiver can also act as a Bluetooth receiver.

The receiver also has a built in AM/FM tuner.

Setting up the receiver is made easy with a “Setup Assistant” which takes the user through the process, step by step, and includes Audyssey MultEQ XT “room calibration” to smooth the performance. (The auto calibration involves the receiver producing a series of test signals which are recorded using the supplied microphone so that the receiver can determine output discrepancies from the ideal and make adjustments to correct them.

Melbourne-based QualiFi is the local important and distributor of Marantz equipment, along with several other quality brands.