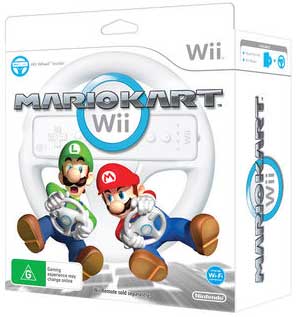 Available 24 April 2008, Mario Kart Wii brings the iconic Mario Kart franchise onto Wii for the very first time. With a host of features including the Wii Wheel, classic and new race tracks, never-before seen Mario Kart characters, new vehicles, Nintendo Wi-Fi Connection, and even a new Wii channel – the Mario Kart Channel – Mario Kart Wii is a must have for every Wii owner.

To make it one of the most accessible Mario Kart games to date, Mario Kart Wii comes bundled with a new accessory – the Wii Wheel. The intuitive Wii Wheel makes it simple for everyone to pick up and play Mario Kart Wii, no matter what your previous gaming experience may be. For those that like a challenge, Mario Kart Wii supports four additional control options; Wii Remote turned sideways, Wii Remote and Nunchuk combination, Classic Controller and the Nintendo GameCube Controller, so there is a control method that fits everyone’s experience and style.

As well as the new race tracks, Mario Kart Wii includes new characters – including your own Mii, weapons and vehicles. For the first time ever players have the option of racing with karts or motor bikes. Racing with a motor bike will offer different game play possibilities and manoeuvres such as ‘wheelies’, which can be crucial in making it first over the finish line.

Connect your Wii to the internet, and Mario Kart Wii is an online multiplayer game thanks to the Nintendo Wi-Fi Connection service. Up to 12 players world wide, can race simultaneously in a contest of speed and skill. The Wi-Fi Connection allows you to see if your friends are playing by checking their status, or you can create a room and use the chat option to send friends messages before a race. You can even jump into your friend’s race as a spectator while their race is in progress, and join the race when the next course begins.

Multiplayer Mode is also an option, where up to four people can challenge each other in your living room.
A new Wii Channel will launch with Mario Kart Wii – the Mario Kart Channel. Monitor your rankings against Mario Kart Wii players world wide, share Ghost Data, access a host of special features, and join a community of Mario Kart Wii racing fans from around the world.

The appeal of the Wii is that anyone can play, by using simple movements, whether they are an experienced game player or not. Wii provides unique, easy, immersive game play for newcomers, as well as redefining game play challengers for core gamers. Wii now has the biggest install base for any new home console in Australia.

Mario Kart Wii retails for $99.95 and is available at all major retailers.