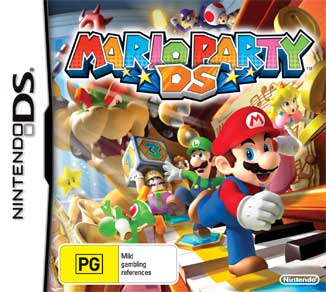 Mario Party is basically an electronic version of a board game – but don’t let that put you off! Rather than make you cajole and harass your reluctant family members to disinterestedly moving pieces around a board, get into petty bickering arguments ending up with several of them storming off in a huff, Mario Party brings all the familiar Super Mario characters round to your house for a fun, fast-paced (when you’re playing the mini games) dose of handheld action.

Mario Party on Nintendo DS is much like any of the Mario Party games that have preceded it. The main game, ‘Story Mode’ is the regular board game version, with each player taking turns to move their board piece to collect points (coins in this case), interspersed with ‘mini games’ where everyone competes. This has always been one of the main attractions of Mario Party games, breaking up any possibly monotony by bringing everyone to the party, so to speak. The overall objective of the game is to collect coins, which in turn allow you to get stars, the holder of most of them being the winner.

The graphics are good for a portable version, the game’s characters as childishly endearing as always, and there’s clearly been a lot of thought put into designing a bunch of games that will keep players entertained. True, you have to watch the other players take their turns and, in single player, this can be quite boring, but they can also prove to be pretty fierce competitors, fighting you down to the last star for victory, so there’s a decent challenge in there too. In fact, despite the general cartoon appearance of the game, it’s really not very accessible for the very young, since the unique functionality of the DS console may make it difficult for youngsters to respond quickly enough in the challenges to be successful. Some mini games, for instance, require players to blow into the microphone (yes, blow!) and doing so virtually guarantees that you can’t see what’s actually happening onscreen, which some players might have trouble with. There is an option to ‘ban’ the games that involve the microphone, however, which is a smart design decision.

In fact, games developed by Nintendo often include a ton of smart design decisions. You can s top mid-game, for example, save it and take up the same game later exactly where you left off – something that many more serious games on the larger consoles still, mystifyingly, don’t allow you to do. Another of the great features of the DS portable unit; the ability to play wirelessly against someone with another DS unit using only a single copy of the game, is alive and well here with Mario Party DS, and greatly enhances the fun aspects of the title.

Other game modes allow you to play the mini games on their own, without the board game element, to play in ‘races’ against other players and even bring back some of the classic gameplay of previous Mario Party games. All in, Mario Party DS is a lot of game for the money and well worth checking out if you like the Mario crew and are looking for a game you can pick up and play for ten minutes, without getting involved in lengthy gaming sessions.

This is a review of Mario Party DS, for the Nintendo DS platform, however for the Wii there is a slightly different flavour of this game available, called Mario Party 8, which retails for $99.95.