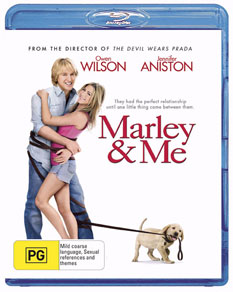 Soppy, sentimental and downright unconvincing, Marley & Me is a small step up from the usual chick-flick guff but not a very big one. The film tells the real-life story of Michigan journalist John Grogan (Owen Wilson) who moves to Florida with his girlfriend (Jennifer Aniston) after landing a new job. Acquiring a new Labrador puppy to ‘test the water’ in lieu of having a real baby, the movie then charts the Grogans’ unsuccessful attempts to instil any degree of obedience whatever into said animal.

But you have to really, really love dogs to forgive what follows; a dull plod through suburban life interspersed with the antics of their dumb mutt that fails to engage any kind of emotion, unless the Beethoven movie series is your idea of brilliant filmmaking. The only real pleasure comes in the funny & sympathetic character of Grogan’s editor boss Arnie Klein, portrayed by Alan Arkin.

The special feature section of Marley & Me creates distinction with its ‘Gag Reel’ but, unfortunately, the distinction is that none of the footage is even remotely funny. Clearly planned from the beginning of the project, the gag reel is perhaps the most slickly produced of any we’ve seen, but is more a ‘behind the scenes’ series of out-takes devoid of any humour, let alone slip-ups, mistakes or pranks that might justify the term. Much of the rest is as excruciating as the main feature.