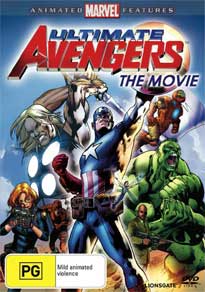 Since 1943, Marvel has dominated the comic book market with the best superheroes and most gripping storylines. In honour of 65 years of saving the world, LionsGate Films introduces Marvel Animated Features – a collection of four animated full-length movies, available on DVD and Bluray (the Ulimate Avengers titles only) from April 30, 2008.

These films stay true to their comic book origins, which have transcended and entertained generations of audiences. Marvel is set to entertain comic book enthusiasts and gamers – young and old alike with these action-packed movies, which are also loaded with special features, including the ‘Which Avenger Are You?’ DVD-ROM game.

Captain America returns to the world after being frozen in ice for 60 years. It’s a different world, a world that needs heroes. With Iron Man, Thor, Wasp, Giant Man, and others, he forms a team to preserve justice in our chaotic times. Together they are The Avengers.

Special features include “Which Avenger Are You?” DVD-ROM game, trivia track, “Avengers Assemble” featurette and the hilarious “The Ultimate Voice talent Search” featurette.

Ultimate Avengers 2 – The Rise of The Panther

The mightiest of heroes must continue their war on behalf of humanity. This time, the aliens and Captain America’s old enemy Herr Kleiser (the alien shape shifter who supposedly died in 1945), are invading a hidden city in Africa, where the Black Panther is king. When Kleiser murders the Black Panther’s father T’Chaka, Black Panther travels to the U.S.A. to seek Captain America’s help. The Avengers respond, travelling to Africa, to war against the invading aliens.

Special features include: ‘The Ultimates’ featurette, ‘The Ulitmate Gag Reel’ and ‘Which Avenger Are You?’ DVD-ROM game.

Past and present collide in this epic adventure that reveals the origin of Iron Man. When billionaire inventor Tony Stark uses break-through technology to physically raise a forgotten city, he awakens an unspeakable evil. Only one man can stop this force of evil,one who will don a powerful suit of armour forged from iron and advanced technology.

To take on the mystical underworld forces of ancient China, he must become The Invincible Iron Man.

Dr. Stephen Strange embarks on a wondrous journey to the heights of a Tibetan mountain, where he seeks healing at the feet of the mysterious Ancient One. But before his wounds can mend, Strange must first let go of his painful past and awaken a gift granted to very few – the gift of magic. Empowered as the new Sorcerer Supreme, Dr. Strange now tests his limits, rising up against monsters that push at the gates, facing the most terrifying entity humankind has ever known.

Special features include The best of Marvel video game cinematics, ‘Who is Doctor Strange?’ featurette, Doctor Strange concept art and a first look at ‘Avengers Reborn’ (the next instalment in the Marvel Animated Features franchise).